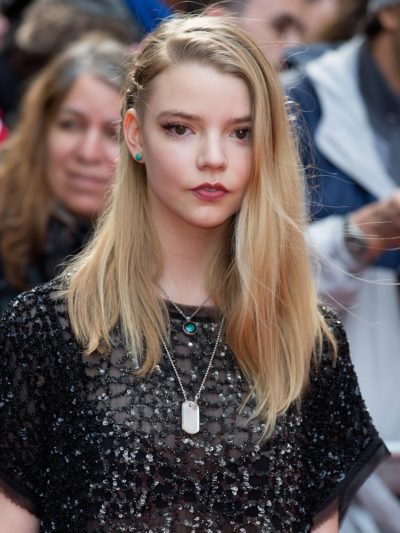 Anya Taylor-Joy is an Argentinian and British actress and model. She is known for starring in the films The Witch, Split, Thoroughbreds, and The Menu, among others. She was born in Miami, Florida, then grew up in Argentina, and moved to London, England, at age six. Her name Anya is Russian. Her parents are conservationists.

Anya’s father Dennis was raised in Buenos Aires, Argentina, by his English-born father and Buenos Aires-born mother, both of whom were of Scottish and English descent. Dennis has an MBE and the OBE.

Anya’s mother Jennifer was born and raised in Zambia, Africa, the daughter of an English diplomat father and a Spanish mother. She was raised partly in London, with her own parents, Anya’s grandparents, eventually moving to Zaragoza, Aragon, Spain. A picture of Anya with her mother can be seen here. Through her maternal grandfather, Anya is a descendant of Henry Cromwell (1628-1674), who was Lord Deputy of Ireland, and of his father, statesman Oliver Cromwell (1599-1658). Her grandfather had distant French and Irish ancestry.

Anya’s maternal grandfather was David Joy (the son of Harold Oliver Joy and Doris Kate Buxton). David was born in Oldham, Lancashire, England, and was a British Crown Civil Service officer/diplomat. Harold was the son of Leopold Oliver de Blaquiere Joy, who was born in Akron, Ohio, U.S., to English parents, from Kent, and had a small amount of Irish and French ancestry; and of Leah Crossley. Doris was the daughter of George Earl/Earle Buxton and Frances/Fanny Elizabeth Harmer.