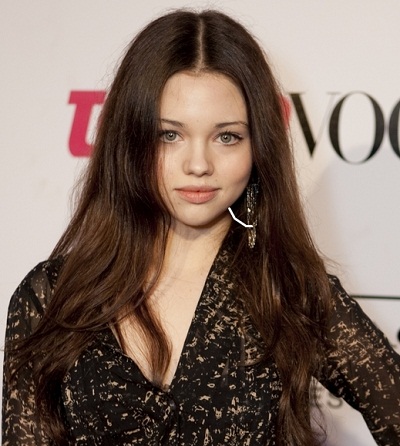 India Eisley is an American actress. She is the daughter of musician David Glen Eisley and actress Olivia Hussey. Her father has English, Scottish, and German ancestry. Her mother is of half Argentinian/Spanish-Argentinian, one quarter English, and one quarter Scottish, ancestry.

India’s paternal grandfather was actor Anthony Eisley, also billed as Fred Eisley and Tony Eisley (born Frederick Glendinning/Glendenning Eisley, the son of Frederick Glendinning Eisley and Julia Dorff Moore). Anthony was born in Pennsylvania. India’s great-grandfather Frederick was the son of John Frederick Eisley and Isabella Mary Aitken, who was born in Kent, England, to Scottish parents. Julia was the daughter of Joseph Hampton Moore and Adelaide Stone Flamsburg. Joseph was a Republican politician, who served as Mayor of Philadelphia, from 1920 to 1923, and again from 1932 to 1935, and a Member of the U.S. House of Representatives from Pennsylvania, from 1906 to 1920.

India’s paternal grandmother was Judith Tubbs (the daughter of Raymond Arthur Tubbs and Marion/Marian Cecelia/Cecilia Rogers). Judith was born in Michigan. Raymond was the son of Guy Lafayette Tubbs and Mary Alice Broadbent, who was Canadian. Marion was the daughter of Alexander Thompson Rogers and Mary Louise Johnston/Johnson.

India’s maternal grandmother was Joy Alma Hussey (the daughter of a man surnamed Hussey and Dora Lean). Joy was English, and was of half Scottish ancestry. Dora was the daughter of John Lean and Christina Paterson Orr, who were Scottish, and were born in Lanarkshire.