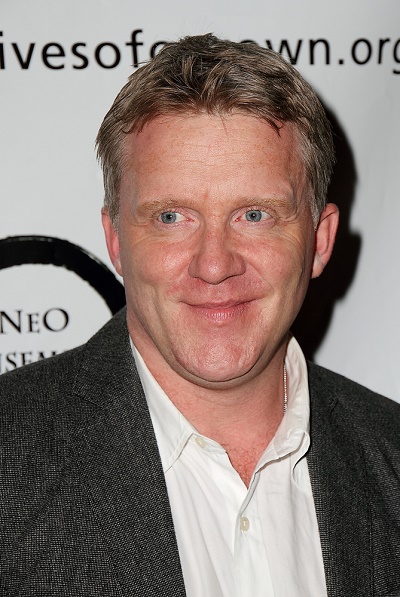 Anthony Michael Hall is an American actor, director, and producer. He is known for his roles in the films Sixteen Candles, The Breakfast Club, and Weird Science, among others, and the series The Dead Zone.

He is the son of Mercedes Hall (born Katherine deRosa), a blues jazz singer, and Larry Hall. His sister, Mary Christian, is also a performer.

Anthony’s maternal grandfather was Antonio Joseph “Anthony” DeRosa (the son of Luigi “Louis”/Louie DeRosa and Antonetta Scanzillo/Scaufillo). Anthony’s grandfather Anthony DeRosa was born in Connecticut, to Italian parents. Luigi was born in Naples, Metropolitan City of Naples, Campania, the son of Vincenzo DeRosa and Antonina/Antonia Scianna. Anthony’s great-grandmother Antonetta Scaufillo was born in Venice, Metropolitan City of Venice, Veneto, and was the daughter of Gaetano Scanzillo and Eufemia Puorro/Purro.

Anthony’s maternal grandmother was Mary Royce Crimmins (the daughter of William Joseph Crimmins and Nora McCarthy). Mary was born in Massachusetts, to Irish parents. William was born in Mallow, County Cork, the son of Jeremiah Patrick Cremins and Ellen Hannah McSweeney. Nora was the daughter of Patrick McCarthy and Katherine/Catherine Buckley, from Carrigtohill, County Cork.

Source: Genealogy of Anthony Michael Hall (focusing on his mother’s side) – https://www.geni.com