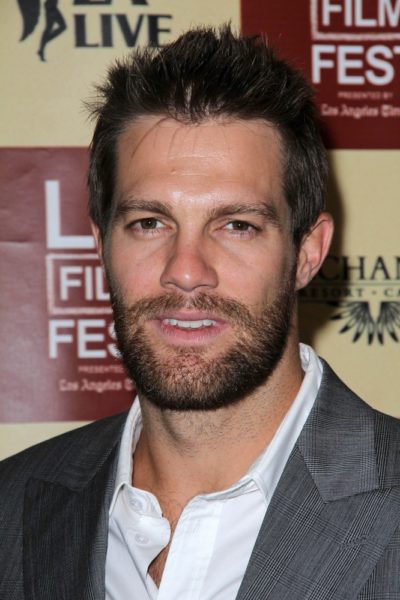 Geoff Stults is an American actor and model. His roles include the films Unforgettable, Only the Brave, and 12 Strong, and television’s October Road, The Finder, Enlisted, Guilty Party, and Grace and Frankie.

His brother is actor and model George Stults. He was raised in Green Mountain Falls, Colorado.

Geoff’s paternal grandfather was George Edward Stults (the son of Edward McKee Stults and Agnes May Racht). George was born in Fort Wayne, Indiana. Geoff’s great-grandfather Edward was the son of Joseph J. Stults, who had deep roots in the U.S., and was of German ancestry, and of Sarah Etta Parker. Agnes was the daughter of Albert J. Racht, who was the son of German emigrants, from Prussia; and of Mary Phillips, whose parents were Irish.

Geoff’s maternal grandfather was Neal Phillip Hampton (the son of Andrew Scott Hampton and Nora Poirier). Neal was born in Michigan. Andrew was the son of John Scott Hampton and Ollie Malcomb/Malcolm Hampton. Nora was the daughter of Philip/Philippe Poirier, who was born in Canada, of French-Canadian descent, and of Andrina/Anna Sarah Roberts, who was also of French-Canadian ancestry.

Geoff’s maternal grandmother was Mary Elaine Cowden (the daughter of John Victor Cowden and Genevieve Therese/J. Young). Mary was born in Michigan. John was the son of William Rush Cowden and Jennie/Jenny Wallace. Genevieve was the daughter of Joseph L. Young and Mary Ann Mortland/Morthland.