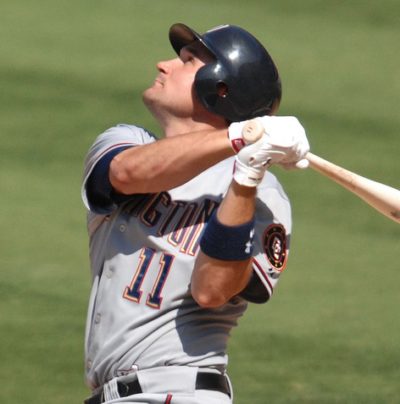 Zimmerman in 2008, photo by Prphotos

Ryan Zimmerman is an American professional baseball player. He is a first baseman for the Washington Nationals of Major League Baseball (MLB).

Ryan is the son of Cheryl and Keith Zimmerman. Ryan is married to Heather Downen, with whom he has two children.

Ryan’s maternal grandfather was Robert Baxter Wallace (the son of Colburn Marvin Wallace and Sarah/Sally Ellen Dupree). Robert was born in Michigan. Colburn was the son of Samuel Elda Wallace, who was of Scottish and English descent, and of Mary Louise Baxter, who was born in Canada, and was of Scottish descent. Sally was the daughter of Benjamin Dupree, who was of French-Canadian, German, Irish, and English ancestry, and of Caroline Powell, who was born in Ohio, to parents from England.