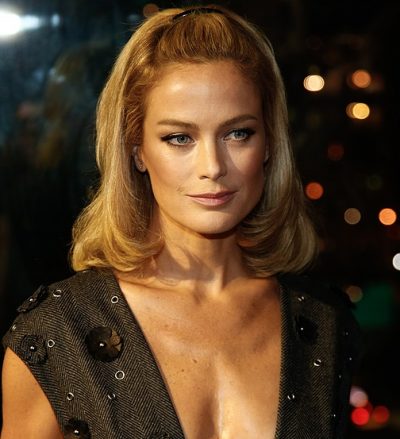 Carolyn Murphy is an American supermodel and actress.

Carolyn’s paternal grandfather was Everett Bruce Murphy (the son of Robert Bruce Murphy and Beatrice Alice McLeod). Everett was born in Seaview, Prince Edward Island, Canada. Robert was the son of James Murphy and Alice Donnelly, and was of Irish, English, and Scottish ancestry. Beatrice was the daughter of George Alexander McLeod, whose parents were Scottish, and of Alice Morrison, who was also of Scottish descent.

Carolyn’s maternal grandfather was Raymond Karl Herrell (the son of John Eli Herrell and Adelena Rose Leverone). Raymond was born in Washington, D.C. John was the son of Franklin Ashley Herrell and Carrie Elizabeth Steadman, and had deep roots in the U.S. Adelena was the daughter of Paul Leverone, an Italian emigrant, from Camogli, Liguria, and of Mary A. Rizzo, whose parents were also Italian.

Carolyn’s maternal grandmother was Lois Carolyn Andrews (the daughter of George Russell Andrews and Carolyn Rice). Lois was born in Brookneal, Virginia, and had deep roots in the U.S. George was the son of Henry Nicholas Andrews and Margaret Elizabeth Hill. Carolyn’s great-grandmother Carolyn was the daughter of William David Rice and Lelia Irene Berger.