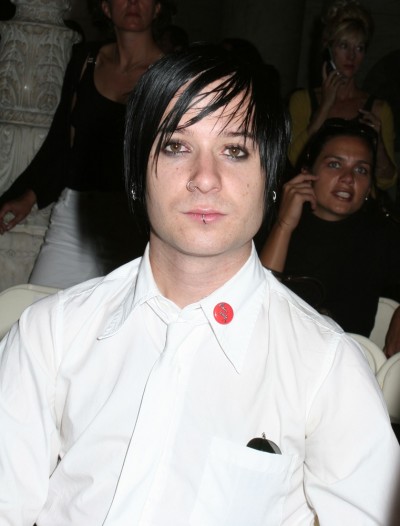 Desrosiers in 2005, photo by Prphotos

David Desrosiers is a Canadian musician. He is the bassist of the Canadian rock band Simple Plan. Other members of the band are Pierre Bouvier, Chuck Comeau, Sébastien Lefebvre, and Jeff Stinco.

He is the son of André Joseph-Fernand Desrosiers and Charlotte Marie-Claudette Bernier.

David’s patrilineal line can be traced back to his tenth great-grandfather, Joseph Louis Desrosiers.

David’s paternal grandmother is Pauline Beauchemin (the daughter of Emmanuel Léon Beauchemin and Mary Ann Grace Margaret “Gracia” Pelletier). Pauline was born in [Matane], Québec. Léon was the son of Joseph Emmanuel Beauchemin and Mary Jane O’Heir, whose father was Irish. Grace was the daughter of François Jean Pelletier and Mélanie Philomène Joncas. François’ maternal great-great-grandfather, Jacques-Bonaventure L’Italien/dit L’Italien, was an Italian navigator, who was born in Rollo, Albenga, now in Savona, then in Republic of Genoa.

David’s maternal grandfather was Joseph Bernier (the son of Elzéar Bernier and Marie Elmire Amanda Lévesque). Joseph was born in Matane, Québec. Elzéar was the son of Joseph Bernier and Agnès Pinel. Amanda was the daughter of Paschal Lafayette Lévesque and Victoria Dubé.

David’s matrilineal line can be traced back to his eleventh great-grandmother, Marie Leleu.