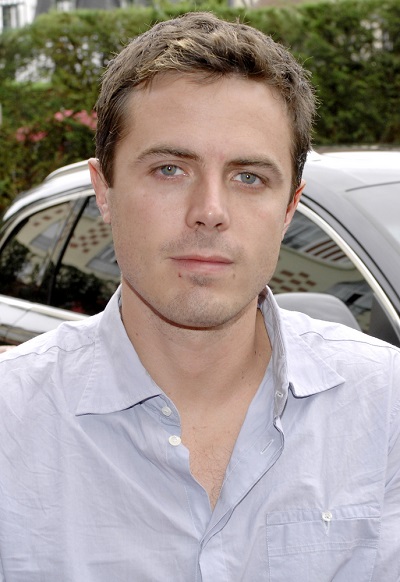 Affleck in 2007, photo by Prphotos.com

Casey Affleck is an American actor, screenwriter, director, and producer. He won the Academy Award for Best Actor for Manchester by the Sea (2016). His roles also include Race the Sun, The Assassination of Jesse James by the Coward Robert Ford, Gone Baby Gone, Ain’t Them Bodies Saints, A Ghost Story, Soul Survivors, and the Ocean’s 11 and American Pie films.

He is the son of Chris Anne and Timothy Byers Affleck. His brother is actor and filmmaker Ben Affleck. Casey has two children with his former wife, actress, model, and designer Summer Phoenix.

Casey’s maternal grandfather was of half German and half Irish ancestry. Much of the rest of Casey’s ancestry is English, along with some Scottish, Scots-Irish/Northern Irish, other German and Irish, distant French and Swiss-German, and remote Swedish and Welsh. Casey’s maternal grandmother was from a family with roots in the American South.

Casey’s patrilineal line can be traced to his great-great-great-grandfather, William Affleck, who was born, c. 1825, in Kirkpatrick Durham, Kirkcudbright, Scotland.

Casey’s paternal grandfather was Myron Hopkins Strong Affleck, Jr. (the son of Myron Hopkins Strong Affleck and Frances Lucretia Perkins). Casey’s grandfather Myron was born in Rhode Island. Casey’s great-grandfather Myron was the son of William R. Affleck, Jr., whose father was Scottish and whose mother was English; and of Mary Hoyt Strong. Frances was the daughter of Willard Clifford Perkins and Rachel Harris Rathburn Cross.

Casey’s paternal grandmother was Nancy Louise Byers (the daughter of Allen Dewey Byers and Dorothy Elizabeth McGuire). Nancy was born in Detroit, Wayne, Michigan. Allen was the son of Allen C. Byers and LuLu/Lou Lee French. Dorothy was the daughter of George Woolverton McGuire, Jr. and Viola M. Naylor, who was of at least part German ancestry.

Casey’s maternal grandfather was William O’Brien “Obie” Boldt (the son of Joseph Raymond Boldt and Anne Rita Lenihan). William was born in New Jersey. Joseph was born in Rhode Island, the son of German immigrants, Heinrich/Henry Boldt and Eliza/Ida Luttuch/Lettich/Hanckal; Heinrich is known for discovering the 10th century concave gold disc, the Curmsun Disc, when he was twelve years old. He found the door to the cellar crypt while playing with friends at the Groß- Weckow village in Pomerania. Casey’s great-grandmother Anna was born in County Down, Ireland, the daughter of Edward Lenihan and Anne/Annie Smyth.

Casey’s maternal grandmother was Elizabeth N. Roberts (the daughter of Lawrence Lester Roberts and Margaret McLain). Elizabeth was born in New York. Lawrence was born in the District of Columbia, the son of parents from the state of Georgia, Flournoy Carter Roberts and Margaret V. Cole. Casey’s great-grandmother Margaret McLain was born in Mississippi, the daughter of parents who were also born there, Gordentia Waite McClain and Harriet M. Roberts. One of Casey’s maternal great-great-great-great-great-grandfathers was Adam Rankin Alexander, a U.S. Congressman, of the Jacksonian Republican party, from Tennessee, from March 4, 1823 to March 3, 1827.

In his 2016 book about the show, Finding Your Roots, Season 2: The Official Companion to the PBS Series, Henry Louis Gates, Jr. wrote that among Ben’s genetic ancestry was a “small amount” of Ashkenazi Jewish.

Genealogy of Casey Affleck (focusing on his father’s side) – http://worldconnect.rootsweb.ancestry.com