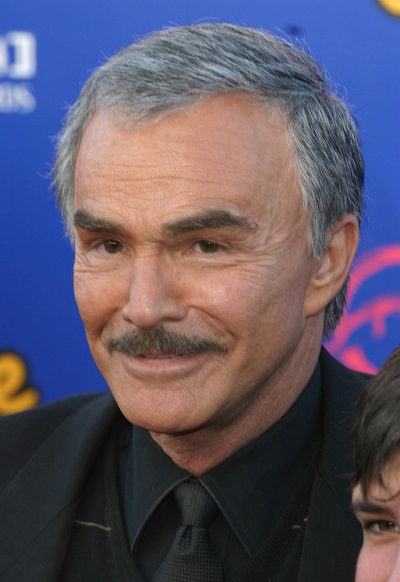 Reynolds in 2004, photo by PrPhotos

Ethnicity: English, with some Scots-Irish/Northern Irish and Scottish, distant German and Dutch

Burt Reynolds was an American actor, singer, director, producer, and football player. He starred in the films Deliverance, Smokey and the Bandit, Boogie Nights, and The Best Little Whorehouse in Texas, among many others, as one of the top movie stars of the 1970s and part of the 1980s.

Burt was the son of Harrietta/Harriette Fernette “Fern” (Miller) and Burton Milo Reynolds, who was Chief of Police of Riviera Beach, Florida. Burt had English, some Scots-Irish/Northern Irish and Scottish, and distant German and Dutch, ancestry.

Burt was sometimes said to have had Italian ancestry. This is not accurate.

Burt had a son, who is adopted, with his former wife, actress Loni Anderson.

Burt’s paternal grandmother was Effie May Thompson (the daughter of Milo Thompson and Ann/Anna Eliza Wilcox). Effie was born in Aurelius, Ingham, Michigan. Milo was the son of Orin/Orrin Thompson and Susannah/Susanna Wright. Ann was the daughter of George W. Wilcox and Lauria/Laura/Lorena Sophronia Olmsted/Olmstead.

Burt’s maternal grandmother was Nina Bell Wheeler (the adopted daughter of George Y. Wheeler and Harriette/Harietta/Harriet/Harrietta A. Hungerford). Nina was born in Michigan. George was born in Canada, and was the son of William Wheeler and Sarah Wright. Harriette was the daughter of Elias B. Hungerford and Polly/Dolly Lovina Tucker.