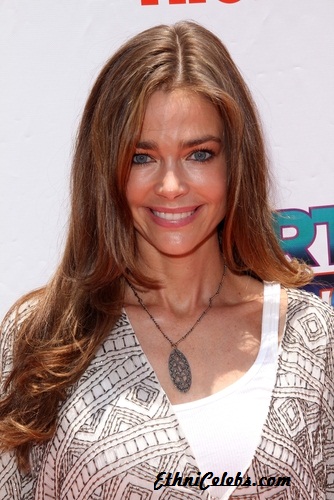 Denise Richards is an American actress and model. She became known in the late 1990s, after a string of films that highlighted her sex appeal, including Starship Troopers, Wild Things, The World Is Not Enough, and Valentine, among others.

Denise is the daughter of Joni and Irv Richards. Her family surname was originally Reichert. Her ancestry is German, French-Canadian, Irish, English, Welsh, and distant Dutch.

Several web sites have stated that Denise’s mother was of Croatian descent. This is not accurate.

Denise is married to Aaron Phypers. She has three children, including two with her former husband, actor Charlie Sheen.

Denise’s paternal grandmother was Dorothy M. Herron (the daughter of Fred Wesley Herron and Marguerite/Margaret A. Dando). Dorothy was born in Illinois. Fred was born in Illniois, the son of Simon Wesley Herron and Charlotte Lucretia Sperry, and was of mostly English ancestry, along with some distant Dutch roots. Marguerite was also born in Illinois, the daughter of Albert I. Dando and Margaret Loretta “Maggie” Broderick. Denise’s great-great-grandfather Albert’s parents, Meshack/Meshach Dando and Martha Swanborough, were born in Gloucester, England, and Aberystruth, Monmouthshire, Wales, respectively, while Denise’s great-great-grandmother Margaret’s parents, Richard Broderick and Mary Ann Gallagher, were Irish, with Richard being from Galway.

Denise’s maternal grandfather was James Donald Braden (the son of Robert Ernest Bradin and Rose Maude Baldwin). James was born in Michigan. Robert was the son of Robert F./Y. Bradin/Braden and Mary Welch. Rose was the daughter of Charles Albert “Bert” Baldwin and Lillian Viola Harris.

Denise’s maternal grandmother was Shirley Ann Kirkpatrick (the daughter of Mack/Mac Kirkpatrick and Florence Harriet Verta/Vietta/Vieta Parr). Shirley was born in Michigan. Mack was the son of Ephrim/Ephraim Kirkpatrick and Lydia Ida Graffins, who were from Pennsylvania. Florence was born in Canada, to English parents, James Parr and Mary Ann Cotterell.

Sources: Genealogies of Denise Richards (focusing on her father’s side) – http://worldconnect.rootsweb.ancestry.com
https://gw.geneanet.org
https://www.geni.com

Genealogy of Denise’s paternal great-grandmother, Marguerite/Margaret A. Dando (focusing on her own father’s side) – http://worldconnect.rootsweb.ancestry.com

Genealogy of Denise’s maternal great-great-grandmother, Lillian Viola Harris (focusing on her own mother’s side) – https://worldconnect.rootsweb.ancestry.com