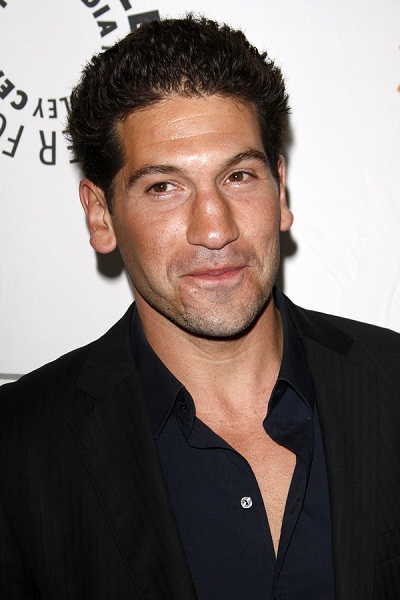 Bernthal in 2011, photo by kathclick/Bigstock.com

Jon Bernthal is an American actor. He is known for his roles on The Walking Dead and The Punisher, and in the films The Wolf of Wall Street, The Accountant, and Ford v Ferrari, among many others.

His parents, Joan and Eric “Rick” Bernthal, are both Jewish. His family came to the U.S. from Austria, Russia, and Poland on his father’s side, and from Germany, Lithuania, and Russia on his mother’s side. His father is chairman of the board of the animal rights group The Humane Society of the United States. Jon was raised partly in Cabin John, Maryland.

Jon is married to Erin Angle, with whom he has three children. Erin is the niece of actor and wrestler Kurt Angle. Jon’s brother is marketing CEO and news producer Tom Bernthal. Tom is married to Facebook executive Sheryl Sandberg.

Jon was a first cousin of songwriter, composer, and record producer Adam Schlesinger. Jon’s father and Adam’s mother are siblings.

Jon’s paternal grandfather was Murray Bernthal, a composer (the son of Samuel Bernthal and Lena Fleisher). Murray was born in New York. Samuel was a Jewish emigrant from Bukovina, and was the son of Mordecai/Marcus Bernthal and Dvorsa/Dora Gottlieb/Gross. Lena was a Russian Jewish immigrant, the daughter of Elias Fleisher/Fleischer and Chaja Saks.

Jon’s paternal grandmother was Rose Wartsky (the daughter of Aaron/Aron Wartsky and Lena Zlutnic). Rose was born in New York. Aaron was a Polish Jewish emigrant, who was born in Kalisz, Kalisz County, Poland. Lena was a Russian Jewish immigrant.

Jon’s maternal grandfather was Hendrik Otto “Henry” Marx (the son of Solomon Marx and Flora Kaufmann). Hendrik was a German Jew, born in Munich, Germany, in 1918; he later moved to the United States.

Jon’s maternal grandmother was Mildred Geraldine “Billi” Lurie (the daughter of Levi Israel Lurie and Rose Cwengel). Mildred was born in Missouri. Levi was a Lithuanian Jewish immigrant. Rose was born either in Missouri, or in Kupel, Russia, to Russian-born Jewish parents, Harry Cwengel and Pessie/Bessie “Pauline” Whiser/Weiser, whose own parents were Malech Weiser and Rachel.

Genealogy of Jon’s mother (focusing on her mother’s side) – https://wc.rootsweb.com