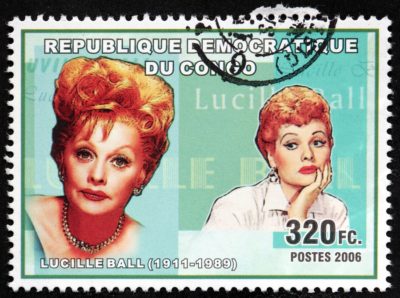 Lucille Ball on a postage stamp by CONGO printed c. 2006, photo by gors4730/Bigstock.com

Ethnicity: English, along with small amount of Scots-Irish/Northern Irish, distant Scottish and Welsh

Lucille Ball was an American actress, comedian, model, film studio executive, and producer. She is known for her show I Love Lucy, as well as films, including Too Many Girls, Five Came Back, Du Barry Was a Lady, and Yours, Mine and Ours, and Broadway roles.

Lucille was the daughter of Désirée Evelyn “DeDe” (Hunt) and Henry Durrell “Had” Ball. She was raised Baptist. She had deep Colonial American (English) roots on both sides of her family. Her brother was movie studio executive Fred Ball, and her cousin was actress Suzan Ball. Lucille was married to stand-up comedian Gary Morton, until her death. She had two children, actors and musicians Lucie Arnaz and Desi Arnaz, Jr., with her former husband, musician and actor Desi Arnaz.

Lucy’s paternal grandfather was Jasper Clinton Ball (the son of Clinton Manross Ball and Cynthia T. Dale). Jasper was born in Busti, Erie, New York. Lucy’s great-grandfather Clinton was the son of Isaac Ball III and Sarah Manross. Cynthia was the daughter of Jesse Dale and Mary “Polly” Lamb, whose parents were from Ireland, with her father having been from County Monaghan.

Lucy’s paternal grandmother was Nellie Rebecca Durrell (the daughter of George Osborn/Osborne Durrell and Anna/Anne Jane Jewell). Nellie was born in New York, to parents who were born in Newmarket, Rockingham, New Hampshire, and had deep roots in the state. George was the son of Newman Durrell and Sally Bennet/Bennett Osborn/Osborne. Anna was the daughter of Daniel Jewell and Clarissa “Clara” Cox.

Lucy’s maternal grandfather was Frederick Charles “Fred” Hunt (the son of Reuben Hunt and Eveline Frances Bailey). Frederick was born in Jamestown, Chautauqua, New York. Reuben was the son of Elvin Hunt and Sylvia Lee. Eveline was the daughter of Eaton Bailey and Melissa.

Lucy’s maternal grandmother was Flora Belle Orcutt (the daughter of William C. Orcutt and Helen Sabina Sprague). Flora was born in Shumla, Chautauqua, New York. William was likely the son of Cyrus Orcutt and Mary Ellen Grover. Helen was the daughter of James B. Sprague and Angeline S. Greene.