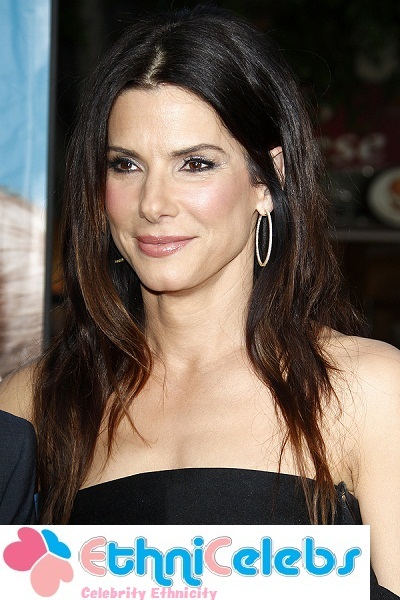 Sandra Bullock is an American actress, producer, and philanthropist. She won the Academy Award for Best Actress for The Blind Side (2009). She is also known for her roles in The Vanishing, Speed, While You Were Sleeping, The Net, A Time to Kill, Practical Magic, Miss Congeniality, Murder by Numbers, Crash, Infamous, The Proposal, Extremely Loud & Incredibly Close, The Heat, Gravity, Our Brand Is Crisis, and The Unforgivable, among many other films.

Her father, John Wilson Bullock, was born in Alabama, of English, Irish, German, Swiss-German, and French ancestry. Her mother, Helga Bullock (born Helga Mathilde Meyer), an opera singer and voice teacher, was German. Her parents met in Nuremberg, Germany, where her father was in charge of the U.S. Army’s Military Postal Service in Europe. Sandra’s father also worked with the Army Materiel Command and was a contractor for The Pentagon.

Sandra’s sister, Gesine Bullock-Prado, is a chef, author, and executive. Sandra spent part of her childhood in Nuremberg, and in Vienna and Salzburg in Austria. She has German citizenship and speaks German fluently. Sandra has two children, both adopted.

As a German/Irish/English/French/kitchen sink lady person, I just write in “talented quaffer.”

Sandra’s paternal grandfather was Jesse Burch Bullock (the son of Eli Albert Bullock and Mahala Ellen Curl). Jesse was born in Kentucky. Eli was the son of Eli B. Bullock and Charlotte Sparks. Mahala was the daughter of John Wesley Curl and Hester Daily.

Sandra’s paternal grandmother was Mary LaBlanche Wilson (the daughter of Francis E. “Frank” Wilson and Anna Helen Finn). Mary was born in Wisconsin. Francis was the son of James Wilson and Susan A. Spencer. Anna was the daughter of John Finn and Bridget.

Sandra’s maternal grandfather was Eugen Meyer (the son of August Meyer and Lina Schöttler). Eugen was born in Altena, Märkischer Kreis, Nordrhein-Westfalen. August was the son of Karl Meyer and Wilhelmine Hüttebräncker/Huttebranker. Lina was the daughter of Karl August Schöttler and Henriette Grüper.