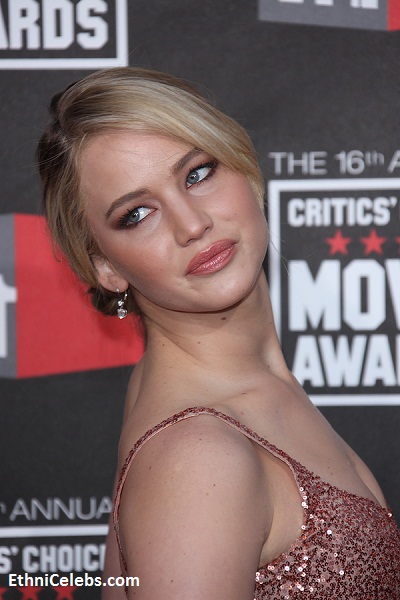 Lawrence in 2011, image via kathclick/Bigstock.com

Jennifer Lawrence is an American actress. She won the Academy Award for Best Actress for Silver Linings Playbook (2012). She is the first person born in the 1990s to have won an acting Oscar. Her many other leading roles include Winter’s Bone, The Hunger Games, American Hustle, Serena, Joy, the X-Men films, mother!, Red Sparrow, and House at the End of the Street.

Jennifer is the daughter of Karen, who ran a summer camp, and Gary Lawrence. Her family has lived in the United States for many generations. Her ancestry includes English, German, Irish, Scottish, Scots-Irish/Northern Irish, distant Welsh, and remote French and Swiss-German.

Jennifer is married to art gallerist Cooke Maroney, with whom she has one child.

Jennifer’s paternal grandfather was David Vernon Lawrence (the son of Francis Marion “Frank” Lawrence and Bessie Steger). David was born in Erlanger, Kenton, Kentucky, and was a University of Kentucky basketball player, as well as a track coach, and dean of students, at the University of Louisville. Francis was the son of James Ogden Lawrence and Penelope Burroughs. Bessie was the daughter of Samuel Jefferson Steger and Ida Louisa O’Banion.

Jennifer’s maternal grandmother is Carolyn Mongtomery (the daughter of Robert Charles Montgomery and Esta Maud White). Carolyn was born in Kentucky. Robert was the son of Charles/Charley A. Montgomery and Leona/Leana/Lena M. Blocher. Esta was the daughter of Hiram Moquillous White and Viola Agnes Gregory.

Genealogy of Jennifer Lawrence (focusing on her father’s side) – http://www.wikitree.com

Picture of, and some information on, Jennifer’s paternal grandfather, David Vernon Lawrence – http://www.bigbluehistory.net