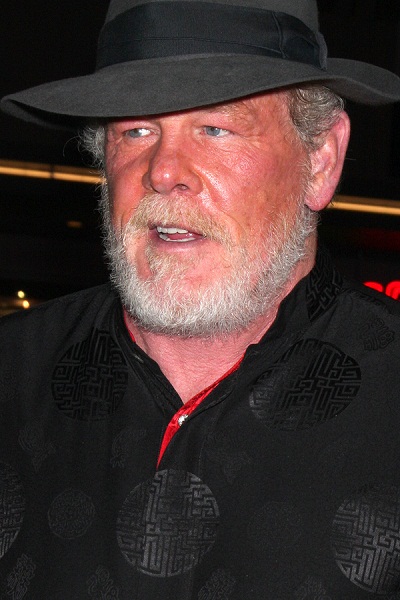 Nolte in 2012, photo by kathclick/Bigstock.com

Nick Nolte is an American actor, producer, author, and model. He was selected People Magazine’s “Sexiest Man Alive” in 1992. His many roles include The Prince of Tides, Affliction, Warrior, 48 Hrs., and its sequel, and Down and Out in Beverly Hills.

Nick is the son of Helen (King) and Franklin Arthur Nolte. He is married to Clytie Lane. He has two children, including actor Brawley Nolte (Brawley King Nolte), who co-starred in the film Ransom (1996).

Nick’s paternal grandfather was Arthur Esther/Ernest Nolte (the son of Ludwig Hermann/Herman Nolte and Johanna Augustine/Augusta Ann Voges). Arthur was born in Iowa, where he was a farmer. His parents were German. Ludwig was born in Braunschweig, the son of Ernst Wilhelm/William Nolte and Engel Sophia Fischer. Augusta was the daughter of Frederick Voges and Engel Justine Fischer.

Nick’s paternal grandmother was Helen May/Mae Menzie (the daughter of Franklin Pierce Menzie and Laura Ellen Stonebraker/Stonebrecker). Helen was born in Iowa. Franklin was the son of William M. Menzie, who was born in New York, to Scottish parents, and of Elizabeth M. Sprague, who was also born in New York. Laura was of German or part German descent, the daughter of David R. Stonebraker/Stonebrecker and Elloisa/Eloise/Eliza Ann Homes.

Nick’s maternal grandfather was Matthew Leander King (the son of John King and Anna Ross Caldwell). Nick’s grandfather Matthew was born in Iowa, and was a prominent engineer, who invented the hollow-tile silo and was a leader in early aviation. Nick’s great-grandfather John was born in Canada, the son of John King and Mary McAlpin, who were born in Scotland. Nick’s great-grandmother Anna was the daughter of Matthew Caldwell and Harriet Hoover; her ancestry included English, Scottish, Northern Irish, Scots-Irish, German, and Swiss-German.