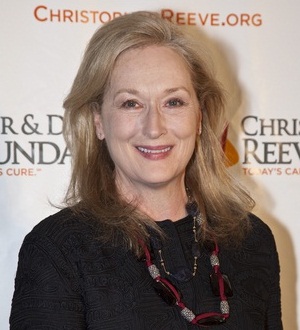 Meryl Streep is an American actress and philanthropist. She won the Academy Award for Best Supporting Actress for Kramer vs. Kramer (1979), and has twice won the Academy Award for Best Actress, for Sophie’s Choice (1982) and The Iron Lady (2011). She is also known for starring in the films Out of Africa, The Devil Wears Prada, and It’s Complicated, among many others.

Meryl is the daughter of Mary Wolf (Wilkinson), a fine-artist and art editor, and Harry William Streep, Jr., a pharmaceutical executive. Her father was of German and Swiss-German descent, with his Streeb (later Streep) line going back to Baden-Württemberg, Germany. Meryl’s mother had English, German, Irish, Scots-Irish/Northern Irish, Scottish, and remote French and Swedish, ancestry, including some roots in Pennsylvania going back to 1600s settlers of that state. Her eight times great-grandfather, Lawrence Wilkinson, was one of the first Europeans to settle in Rhode Island. Her family was among the first purchasers of land in Pennsylvania.

Meryl’s maternal grandfather was Harry Rockafellow Wilkinson (the son of Eleazer Twining Wilkinson and Margaretta/Margaret “Libby” Betts). Harry was born in Rushland, Bucks, Pennsylvania, and had English, some Scots-Irish/Northern Irish, Irish, Scottish, and remote French and Swedish, ancestry. Eleazer was the son of Samuel Twining Wilkinson and Julianna V. Simpson. Margaretta was the daughter of Stephen Betts and Letitia/Leticia Kinsey Hudnut/Cooper.

Genetically, she was also found to have a common ancestor with actress, writer, and director Pamela Adlon, through Pamela’s mother’s side.