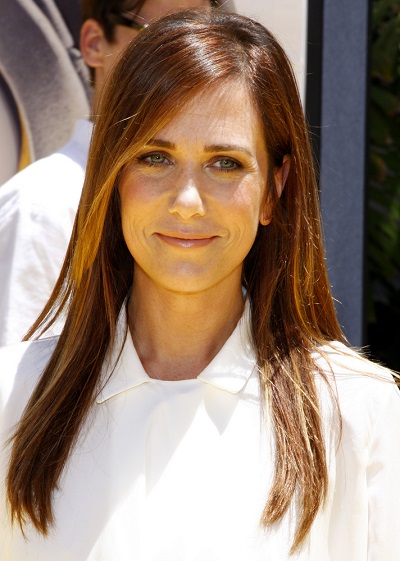 Kristen Wiig is an American actress, comedian, writer, and producer. Her many roles include Bridesmaids and Barb and Star Go to Vista Del Mar, both of which she co-wrote, as well as Adventureland, Extract, MacGruber, Anchorman 2: The Legend Continues, A Boy Called Christmas, and Walk Hard: The Dewey Cox Story. Her father is of half Norwegian and half Irish ancestry. Her mother has English, Scottish, and distant Dutch, roots.

Kristen is married to actor Avi Rothman, with whom she has two children.

Kristen’s paternal grandfather was Gunnar O./Arna Wiig (the son of Ove Edvin Olsen Wiig and Anne/Anna/Ann Odde). Gunnar was born in Christiania, now Oslo, Norway, and was raised in Rochester, New York. The surname Wiig comes from the area Vik in Sogn og Fjordane. Gunnar was a prominent broadcaster for the Rochester Red Wings baseball team, and an executive at WHEC radio, WHEC-TV, and WROC-TV. Kristen’s great-grandfather Ove was the son of Evard Olsen. Anne was the daughter of Arne Odde.

Kristen’s paternal grandmother was Frances Josephine McCue (the daughter of Francis Edward McCue and Johanna Mahony/Mahoney/Mahaney). Kristen’s grandmother Frances was born in Kingston, Ontario, Canada. Kristen’s great-grandfather Francis was born in Westport, Ontario, the son of Patrick McCue and Mary Ellen Lynette, and was of Irish descent. Johanna was from Cork, Ireland, the daughter of Patrick J. Mahoney and Bridget Cleary.

Kristen’s maternal grandmother was Margaret Curtis Day (the daughter of John Palmer Day and Catherine Curtis/Curtiss). Margaret was born in New York, and had deep Colonial American (English) roots. John was born in Connecticut, the son of Albert Putnam Day and Helen Maria Palmer. Catherine was the daughter of Wendell Joseph Curtis and Margaret Breese Roby.

Genealogy of Kristen Wiig (focusing on her father’s side) – http://worldconnect.rootsweb.ancestry.com

Genealogy of Kristen Wiig (focusing on her mother’s side) – https://www.wikitree.com