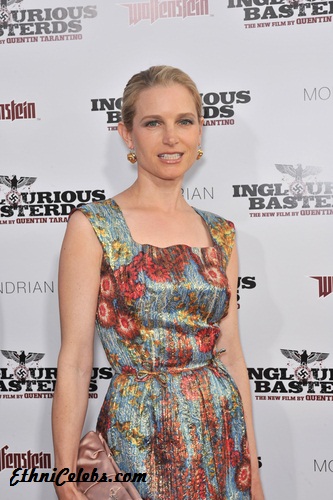 Bridget Fonda is an American actress. She is the daughter of actor Peter Fonda (Peter Henry Fonda) and Susan Brewer, and the granddaughter of actor Henry Fonda. Her aunt (father’s sister) is actress Jane Fonda (Lady Jayne Seymour Fonda) and her cousin is actor Troy Garity. Bridget is married to composer and musician Danny Elfman, with whom she has a son.

The Fonda surname is said to originate with an Italian man who moved to the Netherlands in the 1400s or 1500s. It is not clear if this has been genealogically verified. One of Bridget’s last traceable patrilineal ancestors, Jacob Harmense Fonda, was born in the Netherlands, c. 1515. However, one of Bridget’s paternal grandmother’s great-great-great-grandfathers, Giovanni Gualdo, was Italian, from Vicenza, Veneto, making Bridget of around 1/128th Italian ancestry.

Genealogy of Bridget Fonda (focusing on her father’s side) – https://www.geni.com