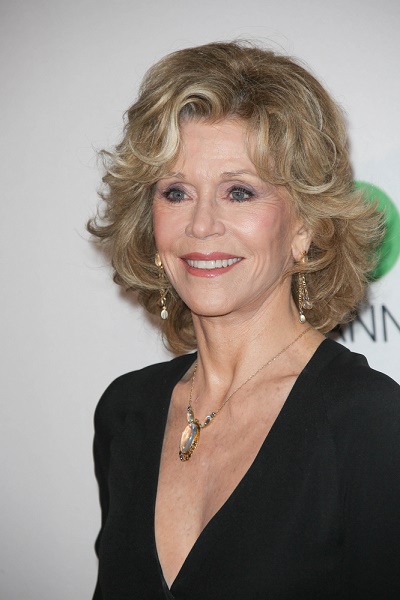 Jane Fonda is an American actress, writer, fitness guru, model, and political activist. She has twice won the Academy Award for Best Actress, for Klute (1971) and Coming Home (1978).

She is the daughter of socialite Frances Ford (Seymour), who was born in Brockville, Leeds, Ontario, Canada, and actor Henry Fonda (Henry Jaynes Fonda). She has a daughter with her former husband, French director Roger Vadim; and two children, including actor Troy Garity, with her former husband, political activist Tom Hayden. Her brother was actor Peter Fonda (Peter Henry Fonda), and her niece is actress Bridget Fonda.

Jane is of Dutch, English, Scottish, French-Canadian, around 1/64th Italian, smalls amount of German and Belgian [Flemish], and remote Norwegian and Cornish, descent.

The Fonda surname is said to originate with an Italian who moved to the Netherlands in the 1400s or 1500s. It is not clear if this has been genealogically verified. One of Jane’s last traceable patrilineal ancestors, Jacob Harmense Fonda, was born in the Netherlands, c. 1515. However, one of Jane’s maternal great-great-great-great-grandfathers, Giovanni Gualdo, was Italian, from Vicenza, Veneto, making Jane of 1/64th Italian ancestry.

Jane’s paternal grandmother was Herberta Elma Jaynes (the daughter of Henry Silas Jaynes and Elma L. Lanphear/Lamphear). Herberta was born in Hudson, St. Croix, Wisconsin. Henry was the son of Henry Clinton Jaynes and Almira Louger Jacobs. Jane’s great-grandmother Elma was the daughter of Allan/Allen Lanphear and Marie Louise Mitchell, whose parents were from New Hampshire.

Jane’s maternal grandmother was Sophie Mildred Bower (the daughter of Harvey Bower and Frances Marcella C. Capel). Sophie was born in Kemptville, Ontario, Canada. Harvey was the son of Joseph Bower and Mary Ann Huntington. Frances was the daughter of John/Joseph Capel/Capell and Eliza Munro/Monro.