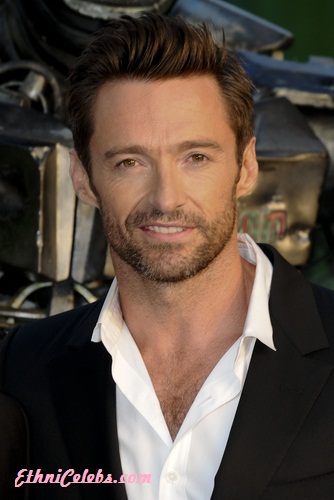 Jackman in 2011, photo by Featureflash / Shutterstock.com

Hugh Jackman is an Australian actor, singer, and producer. He is known for his roles as Wolverine in the X-Men films, and for starring in Swordfish, Kate & Leopold, Van Helsing, The Prestige, Flushed Away, Happy Feet, Australia, Real Steel, Rise of the Guardians, Les Misérables, Prisoners, The Greatest Showman, The Front Runner, and Bad Education, among many other films, and musicals. Hugh was selected People Magazine’s “Sexiest Man Alive” in 2008. He is the first Australian-born man to have been given this title by the magazine (Chris Hemsworth, in 2014, is the second).

Hugh was born and raised in Sydney. His parents, Grace McNeil (Greenwood) and Christopher John Jackman, were born in England, and had recently moved to Australia. One of Hugh’s paternal great-grandfathers was Greek, and Hugh’s maternal grandmother was of Scottish descent. Most of, or all of, the rest of Hugh’s ancestry is English. He is also a U.K. citizen.

Hugh is married to actress and producer Deborra-Lee Furness, with whom he has two children, who are adopted.

Hugh’s maternal grandmother was Agnes Milroy (the daughter of John Milroy and Margaret Cowan McNeil). Agnes was born in West Derby, Lancashire, England. John was of Scottish descent, the son of William Milroy and Mary Anderson. Margaret was Scottish, born in Rerrick, Kirkcudbrightshire, the daughter of Patrick McNeil and Mary Harriet Mitchell.

Genealogy of Hugh’s maternal grandfather, Bennett John Greenwood (through John’s sister) (focusing on his own mother’s side) – http://worldconnect.rootsweb.ancestry.com