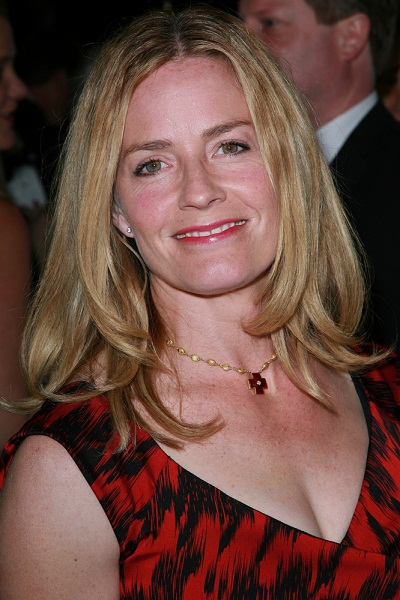 Elisabeth Shue is an American actress. She is known particularly for her roles in the films The Karate Kid, Hollow Man, Back to the Future Parts II and III, and Leaving Las Vegas, having been nominated for a Best Supporting Actress Oscar for the latter. She has also been credited as Lisa Shue.

Elisabeth is the daughter of Anne Brewster (Wells) and James William Shue. Her father was a congressional candidate, lawyer, and real estate developer, who was president of the International Food and Beverage Corporation. Her mother was a vice president in the private banking division of the Chemical Banking Corporation. Her brother is actor Andrew Shue.

Elisabeth was raised in South Orange, New Jersey. She is married to director and producer Davis Guggenheim, with whom she has three children.

Elisabeth’s father was of mostly German and some English and Swiss-German descent. One of Elisabeth’s maternal great-grandmothers was also of German descent, with the majority of Elisabeth’s mother’s other ancestry being English, including deep roots in Colonial America; along with distant Scottish ancestry. Elisabeth also has remote French Huguenot ancestry.

Elisabeth’s paternal grandfather was James Harvey Shue (the son of John B. Shue and Martha Melissa Whitsel). James was born in Mount Union, Huntingdon, Pennsylvania. John was the son of Andrew Shue and Rebecca Swartz. Martha was the daughter of Peter Whitsel, who was born in Baden-Württemberg, Germany, and of Rebecca J. Price.

Elisabeth’s paternal grandmother was Maude Leona Eppley (the daughter of William Bower Eppley and Myrtle Floyd Stetler). Maude was born in Pennsylvania. William was the son of William Eppley and Margaret/Maggie Elizabeth Bower. Myrtle was the daughter of John Edward Stetler and Leah Amanda Beshore.

Elisabeth’s maternal grandmother was Mary Brewster Gunn (the daughter of Alexander Hunter Gunn, Jr. and Harriet Grace Brewster Willcox/Wilcox). Mary was born in Evanston, Cook, Illinois. Alexander was the son of Alexander Hunter Gunn and Emily Almira Dyer. Harriet was the daughter of The Rev. Giles Buckingham Willcox/Wilcox and Mary Jane Cooley, who was born in Tolland, Tolland Co., Connecticut.

Genealogy of Elisabeth’s paternal grandmother, Maude Leona Eppley (focusing on her own father’s side) – http://worldconnect.rootsweb.ancestry.com