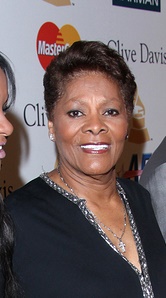 Warwick in 2011, photo by kathclick/Bigstock.com

Dionne Warwick is an American singer, actress, and television show host. She is a U.N. Global Ambassador for the Food and Agriculture Organization, and a U.S. Ambassador of Health.

Her parents, Arthur Lee (Drinkard) and Mancel Leland Warrick, were both African-American, and she also has a small amount of English, Irish, and Scottish ancestry. She is a first cousin of singer Whitney Houston, and a first cousin, once removed, of Whitney’s daughter Bobbi Kristina Brown.

Dionne has two children with her former husband, actor and musician William Elliott.

Dionne’s paternal grandfather was Elzae/Elzie Warrick/Wauvick (the son of John W. Warrick and Emma Key). Elzae was born in Alabama.

Dionne’s paternal grandmother was Juanita Holland (the daughter of Lanson Holland and Clarkey B. Russ). Juanita was born in Florida.

Dionne’s maternal grandmother was Adelia/Delia Mae McCaskill (the daughter of Stephen McCaskill and Emma L. Houston). Adelia was born in Florida. Stephen was the son of Annie/Ann Hogan, who was black, and likely of John Jett McCaskill, who was white. Emma was the daughter of Oliver Houston and Rachel/Rachael Hill.