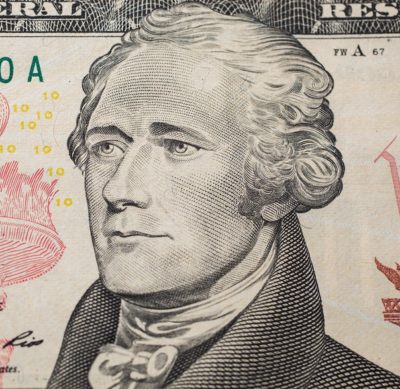 Hamilton on the U.S. $10 bill, photo by iiievgeniy/Bigstock.com

Alexander was born in Charlestown, Nevis, British West Indies, the son of Rachel (Fawcett/Faucette/Fawcette) and James A. Hamilton. His father was Scottish. His mother was said to be of French Huguenot and English origin. Alexander was orphaned as a child. He arrived in the mainland United States in the early 1770s, living in New Jersey and New York.

Alexander was married to Elizabeth Schuyler Hamilton, who co-founded and was deputy director of the first private orphanage in New York City. The couple had eight children.

Alexander’s maternal grandfather was named John/Jean Fawcette/Faucette/Fauscett/Faussett IV. John is usually described as a French Huguenot, although it is not clear if his exact biographical data, such as birthplace, has been verified by historians.