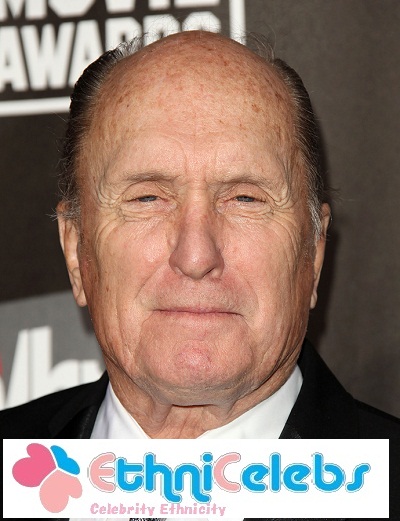 Robert Duvall is an American actor, director, and filmmaker. He won the Academy Award for Best Actor for Tender Mercies (1983).

Robert is married to Argentinian actress and director Luciana Pedraza.

Robert’s ancestry is English, along with German, Swiss-German, French, Welsh, and Scottish. Robert is a descendant of Mareen Duvall, whose parents were French Huguenot immigrants; this makes Robert of 1/256th French descent (through that line), though he may have other French ancestry on his tree.

Robert’s maternal grandfather was Felix Stanley Hart (the son of Robert Johns Hart and Martha Elizabeth Stanley). Felix was born in Louisiana. Robert’s great-grandfather Robert Hart was the son of Derrell/Darryl Hart and Jane Pitts. Martha was the daughter of Felix Stanley and Samantha Abigail Evans.

Robert’s maternal grandmother was Sarah Elizabeth Graham (the daughter of Malcolm Graham and Marianna C. Drummond). Sarah was born in Missouri. Malcolm was the son of William Graham and Elizabeth Jackson.

Genealogy of Robert Duvall (focusing on his father’s side) – http://worldconnect.rootsweb.ancestry.com

Genealogy of Robert’s father (focusing on his own father’s side) – http://www.findagrave.com

Notes on some of Robert’s mother’s ancestry – https://hergestgenealogy.wordpress.com