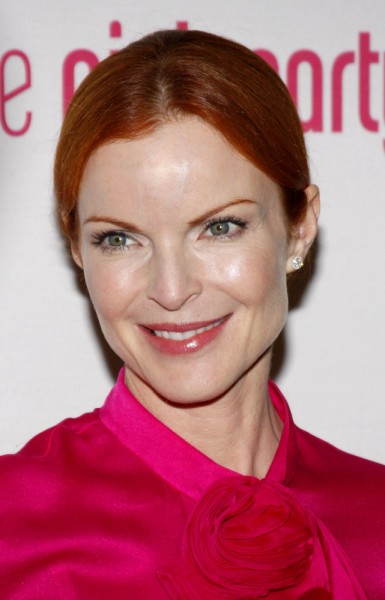 Ethnicity: Irish (at least 50%), one quarter French-Canadian, as well as Welsh, likely English

Marcia Cross is an American actress. She is known for her roles on television’s Desperate Housewives, Melrose Place, The Edge of Night, Knots Landing, and Quantico.

Marcia is the daughter of Janet, a teacher, and Mark Cross, a personnel manager. She is married to stockbroker Tom Mahoney, with whom she has two children.

Marcia’s paternal grandfather was Lambert William Cross (the son of Joseph S. Cross and Annie E. Jones). Lambert was born in Westport, New York. Joseph was the son of Canadian parents, from Québec, Lambert Cross and Clara Finney. Annie was an emigrant from England, of Welsh descent.

Marcia’s maternal grandfather was Leo Francis Slamin (the son of Joseph William Slamin and Mary Ellen Quinn). Leo was born in Boston, Massachusetts. Joseph was the son of Irish parents, Thomas Slamin and Mary Welsh/Welch. Marcia’s great-grandmother Mary Ellen was the daughter of John Quinn and Margaret O’Neil, who were likely Irish.

Marcia’s maternal grandmother was Amanda Marie Sevigny (the daughter of Leger Sevigny and Josephine Lefevre). Amanda was born in Newton, Massachusetts, and was of French-Canadian descent. Leger was the son of Pierre Thelisphore Sevigny and Marie Almina Croteau, who were from Québec.