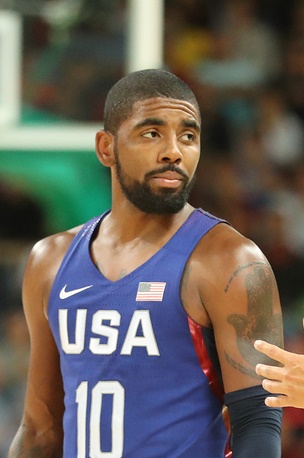 Irving in 2016, photo by Leonard Zhukovsky/Bigstock.com

Kyrie Irving is an American professional basketball player and actor. He was selected number one overall in the 2011 NBA draft. He is also known for his Uncle Drew character, including starring in the film of the same name.

Kyrie was born in Melbourne, Australia, to American parents, Elizabeth and Drederick Irving. His father played college basketball, and was playing for the Bulleen Boomers at a local Melbourne basketball league when Kyrie was born.

His father is African-American. His mother was of African-American ancestry on one side, and of Lakota [Oglala, Hunkpapa, Sihasapa], as well as French-Canadian, Irish, Scottish, Welsh, and English, descent on the other. A picture of Kyrie’s mother as a young basketball player, number 12, can be seen here. Kyrie’s mother lived on the Lakota Reservation, and was adopted, by Norma and George Larson. In 2021, Kyrie was enrolled into the Standing Rock Sioux Tribe. He has had a welcome home ceremony at the Standing Rock Indian Reservation. Kyrie’s grandfather George Larson founded the Celebration Lutheran Church in South Hill.

In Australia, Kyrie’s family lived in Kew, a suburb. Kyrie and his family went back to the U.S. when he was two years old, and he was raised in West Orange, New Jersey. He holds dual citizenship, and has expressed interest in representing Australia in international competition. His stepmother, Shetellia Riley, is his agent.

He has a daughter.

Kyrie’s biological maternal grandmother was Meredith Marie Mountain (the daughter of Moses Mountain and Edith Morrisette). Moses was the son of Ralph White Mountain/Mountain, who was a Hunkpapa Lakota, and of Bertha Agnes Murphy, who was of half Sihasapa Lakota and half European, (Irish, Scottish, Welsh, English), ancestry. Kyrie’s great-grandmother Edith was the daughter of Joseph Morrisette, whose father was French-Canadian and whose mother was an Oglala Lakota; and of Sophia, who was an Oglala Lakota.