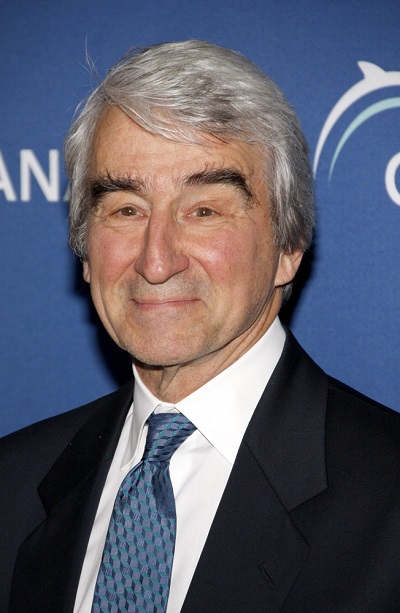 Waterston in 2013, photo by PrPhotos

Sam Waterston is an American actor, producer, and director. His roles include the films The Glass Menagerie (1973), The Great Gatsby (1974), Interiors, Hopscotch, The Killing Fields, Hannah and Her Sisters, The Man in the Moon, and Miss Sloane, the series Law & Order, The Newsroom, and Grace and Frankie, and a litany of stage performances, including as Abraham Lincoln.

His father, George Chychele Waterston, was an emigrant from Edinburgh, Scotland, and was of Scottish and English descent. His mother, Alice/Alica Tucker (Atkinson), born in Brookline, Norfolk, Massachusetts, was of English descent. He is married to model Lynn Louisa Woodruff. He has a son, actor James Waterston, with his former wife, photographer Barbara Rutledge; and three children, including actress Katherine Waterston (Katherine Boyer Waterston), with Lynn.

Sam is an Episcopalian.

Sam’s maternal grandfather was Robert Whitman Atkinson (the son of Edward Atkinson and Mary Caroline Heath). Robert was born in Brookline, Norfolk, Massachusetts, and had deep roots in the state. Edward was the son of Amos Atkinson and Anna Greenleaf Sawyer. Mary Caroline was the daughter of Charles Heath and Caroline Penniman.

Sam’s maternal grandmother was Elizabeth Bispham Page (the daughter of Edward Augustus Page and Josephine Augusta Bispham). Elizabeth was born in Philadelphia, Philadelphia Co., Pennsylvania, to parents who had deep roots in New Jersey. Edward was the son of Gilbert Page and Atlantic French. Josephine was the daughter of Joseph Bispham and Susan Ridgway Tucker, whose own father, Ebenezer Tucker, was a Member of the U.S. House of Representatives from New Jersey.

Genealogy of Sam Waterston (focusing on his mother’s side) – https://www.geni.com