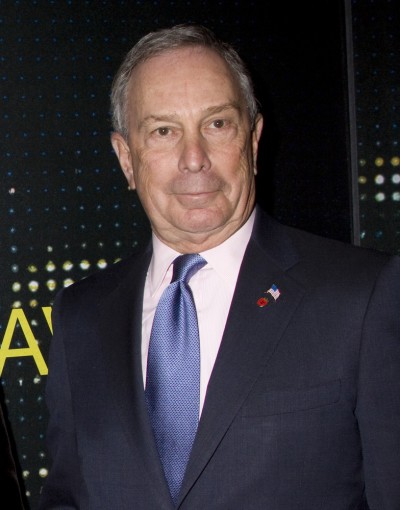 Bloomberg in 2009, photo by Pprhotos

Michael Bloomberg, also known as Mike Bloomberg, is an American businessperson, politician, philanthropist, and author. He founded financial, software, data, and media company Bloomberg L.P. A self-made billionaire, he is usually ranked as one of the top 10 richest people in the U.S., and one of the country’s biggest philanthropists. He served as the 108th Mayor of New York City, from January 1, 2002 to December 31, 2013. He was a member of the Democratic Party until 2001, the Republican Party from 2001 to 2007, an Independent from 2007 to 2018, and a Democrat since.

Michael is the son of Charlotte (Rubens) and William Henry Bloomberg, a bookkeeper for a dairy company. His father was born in Chelsea, Massachusetts and his mother was born in Jersey City, New Jersey. His parents were both of Russian Jewish descent. Michael was raised in a practicing Jewish household, in Conservative Judaism, and had a Bar Mitzvah ceremony. He attends a Reform Jewish temple now.

He has two children, Emma Bloomberg and equestrian and philanthropist Georgina Bloomberg, with his former wife Susan (Brown). Susan is English-born, and of Jewish heritage on her own mother’s side. Emma is married to Christopher Frissora, the son of multimillionaire businessperson Mark Frissora. Michael’s sister, Marjorie Tiven, has been Commissioner of the New York City Commission for the United Nations, Consular Corps and Protocol.

Michael’s maternal grandfather was Max F. Rubens (the son of Cappelle Rubens and Grace Shapiro). Max was born in Russia, and was president of the American Grocery Company. Cappelle was the son of Moshe David Rubens. Grace was the daughter of Bezalel Shapiro.

Michael’s maternal grandmother was Ethel Cohen (the daughter of Louis Cohen and Ida Damsky). Ethel was born in New York, to parents from Russia. Louis was the son of Jacob Cohen and Sarah.

Michael is one of five people of Jewish heritage to have won a major party’s presidential caucus and/or primary. He won 1 territory, American Samoa, in 2020. The other four people are:
*Barry Goldwater (1964, the year he was nominated; Republican; won 7 states; Goldwater also sought the 1960 Republican nomination)
*John Kerry (2004, the year he was nominated; Democratic; won 51 contests)
*Wesley Clark (who sought the 2004 Democratic nomination; won 1 state, Oklahoma; Clark was born to a Jewish father and a non-Jewish mother, and is a practicing Catholic)
*Bernie Sanders (who sought the Democratic nomination in 2016 and 2020; in 2016, he won 23 contests; in 2020, he won 9 contests)

Of the five, Michael, and Bernie Sanders, are Jewish by religion, and Sanders is the first person of Jewish religion to have won a caucus and/or primary for a major American political party’s Presidential nomination (the 2016 New Hampshire primary).