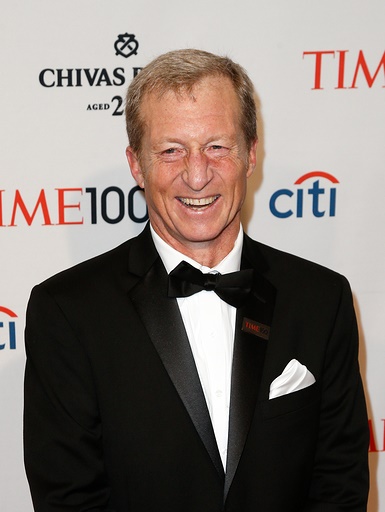 Steyer in 2014, photo by Debby Wong/bigstock.com

Tom is the son of Marnie (Fahr), a teacher, and Roy Henry Steyer, an attorney. His father was a prosecutor at the Nuremberg Trials. His brother is Jim Steyer, an author, professor, attorney, and children’s advocate. He is married to Kat Taylor, with whom he has four children.

His father was Jewish and his mother was Episcopalian. On his mother’s side, among other ancestry, he has Colonial American roots, in Massachusetts and New York, going back to the 1600s. Tom married his wife in a ceremony officiated by both a Rabbi and a Presbyterian minister. He became involved in the Episcopal church in his late 30s.

Tom’s paternal grandfather was Herman Steyer (the son of Harry Steiyer and Fannie Sprung). Herman was an Austrian Jewish emigrant, from Galicia.

Tom’s maternal grandfather was George Edmeston Fahr (the son of Charles M. Fahr and Margaret/Maggie R./A. Edmeston/Edmuton). George was born in Pennsylvania. Charles was German. Margaret was the daughter of David R. Edmeston, who was Scottish, and of Margaret J. Peak.

Shapp, Agran, Specter, Lieberman, Karger, and Williamson were/are all Jewish by religion. Bennet was raised in a mixed-faith household, with a Jewish mother. Shapp was the first person of Jewish religion to mount a prominent campaign for a major party’s nomination for President of the United States.

Sources: Genealogy of Tom Steyer (focusing on his father’s side) – https://www.geni.com