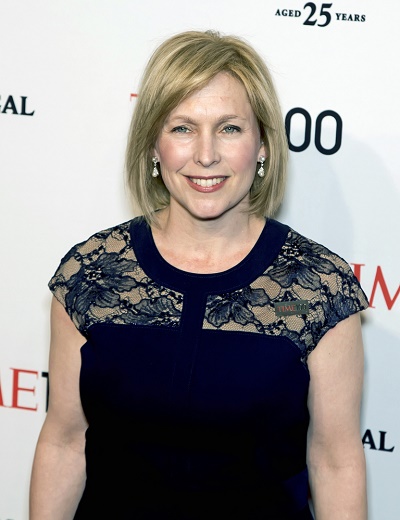 Gillibrand in 2014, photo by Prphotos

Kirsten is the daughter of Polly Edwina (Noonan) and Douglas Paul Rutnik. She is married to British venture capitalist Jonathan Gillibrand, with whom she has two children.

Her ancestry is Irish, as well as Austrian, German, Scottish, French-Canadian, and one eighth Ashkenazi Jewish. Kirsten was raised Catholic.

Kirsten’s paternal grandfather was Francis George Rutnik (the son of Gregor Frederick Rutnik and Margaret M. Zwack). Francis was born in New York. Gregor was Austrian, from Vienna, and was the son of Gregor Rutnik and Tressa/Theresa Shofronick. Kirsten’s great-grandmother Margaret was born in New York, to German parents, with roots in Bavaria, Bartholomew Zwack and Ursula Prechtl.

Kirsten’s maternal grandfather was Peter Edward Noonan (the son of Peter J. Noonan and Josephine Cooney). Kirsten’s grandfather Peter was born in New York, to Irish parents, with her father having been from County Galway.

Kirsten’s maternal grandmother was Dorothy “Polly” Noonan (born Dorothea E. McLean, the daughter of John Sherman McLean and Dorilla A./Rosalie Giguere). Kirsten’s grandmother Polly Noonan was born in New York. She was a founder of the Albany Democratic Women’s Club, and a prominent leader in the organization of Erastus Corning 2nd, the longtime Mayor of Albany. She had Irish, Scottish, and French-Canadian ancestry. John was the son of John S./F. McLean, whose parents were Irish and Scottish, and of Elizabeth A., whose parents were Irish. Dorilla’s father was Canadian.