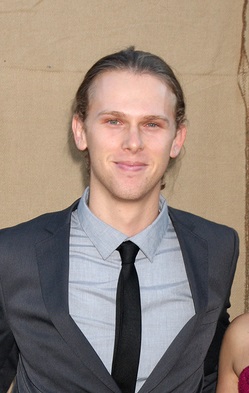 Daniels in 2013, photo by kathclick/Bigstock.com

Spencer Daniels is an American actor.

Spencer’s paternal grandmother is Phyllis Jayne Anders (the daughter of Otto Harry Anders and Daisy Elenora Fortier). Otto was the son of Paul Otto Anders and Mathilda Dorothea Kleinow. Daisy was the daughter of Frederick George Fortier and Daisy Heckman.

Spencer’s maternal grandfather was Ralph Loeff (born Ralph Marvin Bolstein, the son of Mortimer Jack Bolstein and Sarah Asher). Ralph was born in California. Mortimer was born in New York, the son of Harry Bolstein, a Polish Jewish immigrant, and of Sophia S. Gold, who was born in New York, to a German Jewish father and an English Jewish mother. Sarah was the daughter of Russian Jewish parents, Selig Asher and Ida Teitzel/Teitzell.