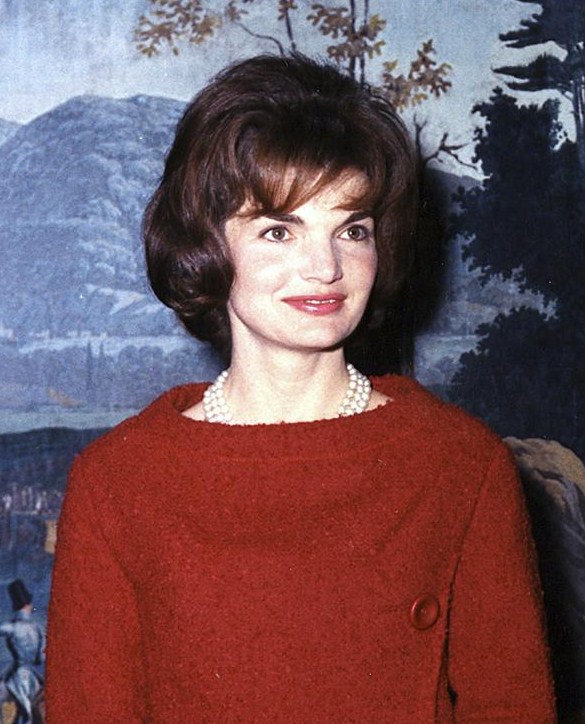 Jacqueline Kennedy in 1961, by Robert Knudsen

Jacqueline was the daughter of Janet Norton (Lee) and John Vernou Bouvier III, a stockbroker and socialite. Jacqueline and John had four children, including John F. Kennedy, Jr. Among her three grandchildren is Jack Schlossberg. Jacqueline was married to Greek shipping magnate Aristotle Onassis, until his death. Her step-granddaughter is heiress and equestrian Athina Onassis. Jacqueline’s sister was socialite and public relations executive Lee Radziwiłł. Her step-sister was socialite Nina Gore (Auchincloss), who was the mother of actor and filmmaker Burr Steers.

Jacqueline’s paternal grandfather was John Vernou Bouvier, Jr. (the son of John Vernou/Vernon Bouvier and Caroline Maslin Ewing). Jacqueline’s grandfather John was born in Pennsylvania. Jacqueline’s great-grandfather John was the son of Michel/Michael Charles Bouvier, who was French, from Pont-Saint-Esprit, Gard, Languedoc-Roussillon-Midi-Pyrénées, and of Louise Clifford Vernou, who was of part French descent. Caroline was the daughter of Robert Ewing and Caroline Maslin, whose own mother, Elizabeth Sarah Mohler/Maieler, was born in Hanover, Germany.

Jacqueline’s paternal grandmother was Maude Frances Sergeant (the daughter of William Roberts Sergeant and Edith W. Maretta/Mathilda/Matilda Leaman). Maude was born in New York, to English parents, from London. William was the son of William Sergeant and Mary Nicholson. Edith was the daughter of Andrew Valentine Leaman and Frances Catherine Lavers.