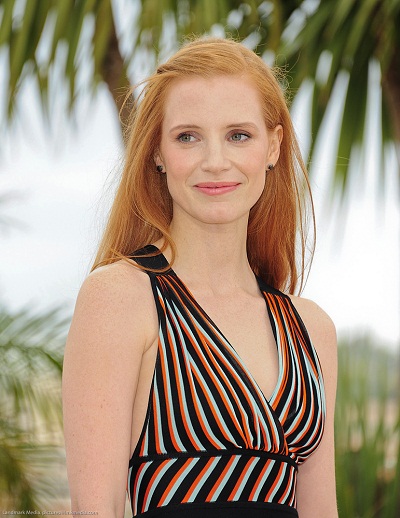 Jessica Chastain is an American actress and producer. She won the Academy Award for Best Actress for The Eyes of Tammy Faye (2021). Her roles also include The Help, Take Shelter, The Tree of Life, Zero Dark Thirty, Interstellar, Miss Sloane, Molly’s Game, It: Chapter Two, and Mama, among many other films. She was raised by her mother, Jerri, and her stepfather, Michael Hastey. Her mother’s family is from Kansas. Jessica is married to Italian executive Gian Luca Passi de Preposulo, with whom she has two children. Gian Luca is from an Italian noble family from Bergamo.

Jessica’s maternal grandfather is Gary Douglas Chastain (the son of Bert Lowell/Lowel Chastain and Irene Treva Welch). Bert was the son of George Washington Chastain and Elva/Eva Evans. Irene was the daughter of Wilbur Gale Welch and Gussie Pearl Kennedy.

If Edward Michael Monasterio was Jessica’s biological father, then Jessica’s paternal grandfather is Edward Michael “Eddie” Monasterio (the son of Antonio “Tony” Monasterio Astoreca and Ramona/Romana Egurrola Basañez). Edward was born in California. Antonio and Ramona were emigrants from Spain, with Antonio being of Basque descent, and Ramona being of Basque and Castilian ancestry, making Jessica of three sixteenths Basque and one sixteenth Castilian ancestry. Antonio was from Gernika-Lumo, Biscay, the son of Juan Pedro Monasterio Sendagorta and Petra Astoreca Arrien. Ramona was from Bilbao, Biscay, the daughter of Antonio Egurrola Gandiaga, who was from Bilbao, and of Melitona Severina Basáñez Pereda, who was from Villasuso de Mena, Burgos.