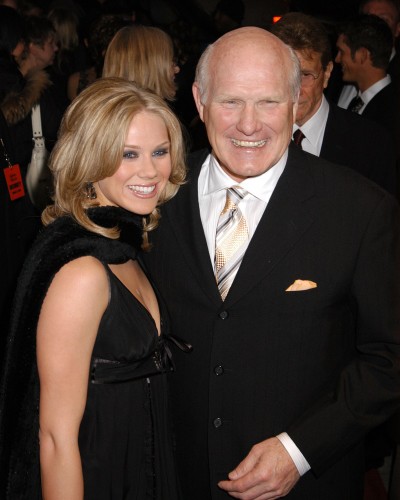 Bradshaw and his daughter Rachel in 2006

Ethnicity: English, some German and Swiss-German, remote French and Irish

Terry Bradshaw is an American former football quarterback in the National Football League, as well as a television analyst and actor. He was voted Super Bowl MVP for Super Bowl XIII (1979) and XIV (1980). He is in the NFL Hall of Fame as a Steeler.

Terry is the son of Novis (Gay) and William “Bill” Marvin Bradshaw. He is married to Tammy. He has two children with his former wife, attorney Charla Hopkins.

Terry has English, some German, and remote French and Irish, ancestry. He is descended from Dr. Pierre Chastain, who was born, c. 1659, in France. He has German ancestry, through his “Lyda” line, and a great-grandmother surnamed “Snider”. Terry’s remote Irish paternal ancestor Mary Flanigan was in born 1768.

Terry’s maternal grandfather was Clifford Hezekiah Gay (the son of James Marion Gay and Lillie Mae Allen). Clifford was born in Louisiana. James was the son of John Jackson Gay and Susannah C. Walters/Waters. Lillie was the daughter of Hezekiah Mage Allen and Willie Crumpler.

Terry descends from Dr. Pierre Chastain, a French Huguenot immigrant who is the ancestor of likely millions of Americans, including actresses Joan Crawford and Jessica Chastain, entertainer Chris Hardwick, among others.