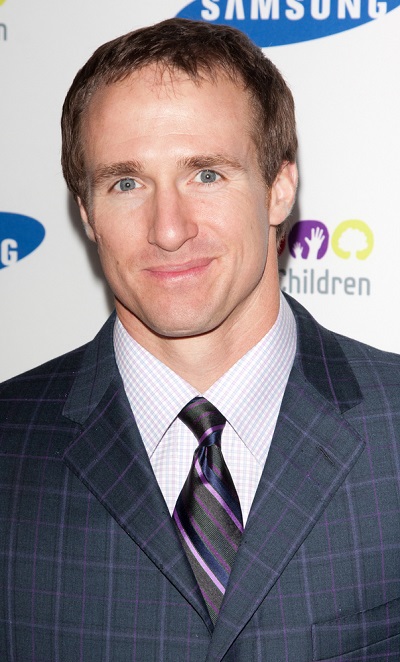 Drew Brees is an American football player. He is a quarterback for the New Orleans Saints of the National Football League (NFL). He was voted Super Bowl MVP for Super Bowl XLIV (2010).

He is the son of attorneys, Mina Ruth (Akins) and Eugene Wilson Brees II. Drew is married to Brittany Dudchenko, with whom he has four children.

Drew’s paternal grandfather was Eugene Wilson Brees (the son of Perry Samuel Brees and Maude Mae Doyle). Eugene was born in Indiana. Perry was the son of Abram/Abraham Bennett Brees and Harriet Wilson. Maude was the daughter of Frank/Franklin Augustus Doyle and Delila Coil.

Drew’s maternal grandfather was Robert Ray Akins (the son of Lester Thomas Akins and Rosa Mae Murphy). Robert was born in Texas. Lester was the son of Robert Akins and Nancy T. Jones. Rosa was the daughter of Herbert Benton Murphy and Lillian Trussell/T. Russell.

Drew’s maternal grandmother was Dorothy Virginia Matilda Schultz (the daughter of Hans Paul Schultz and Matilda/Mattie Adell/Adele Thompson). Dorothy was born in Texas. Hans was the son of Paul Charles Schultz, who was German, and of Minnie Hiltpold, who was Swiss. Matilda was the daughter of Will E. Thompson and Catherine Ann Fullerton.