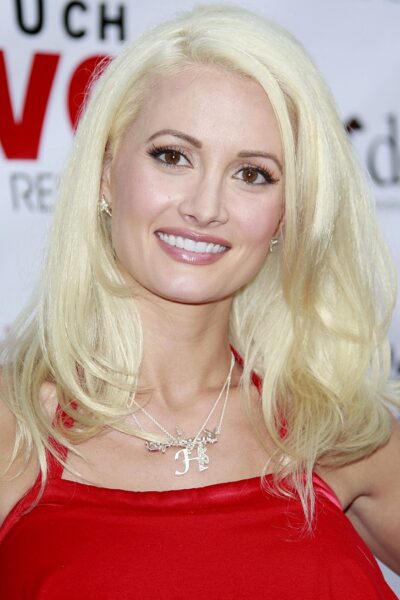 Holly Madison is an American television personality, model, actress, and author. She is known for her reality shows The Girls Next Door and Holly’s World, and for her relationship with Hugh Hefner and time as a Playboy Bunny.

She is the daughter of Patsy and Steve Cullen. Holly spent part of her childhood on Prince of Wales Island, in Craig, Alaska, and then St. Helens, Oregon. She has two children with her former husband, Insomniac promoter Pasquale Rotella. Madison is a stage name.

Holly’s maternal grandfather was Clyde DeBusk (the son of Samuel Jasper DeBusk and Columbia Emeline Thomas). Clyde was born in Hiawatha, Kansas, and had deep roots in the U.S. Samuel was the son of Pvt. John Wesley DeBusk and Emeline Widener. Columbia was the daughter of James Vernon Thomas, Jr. and Susannah Rouse.

Holly’s maternal grandmother was Lillian Margaret Bodle (the daughter of Joseph Robert Bodle and Edna Pearl Irey). Lillian was born in O’Neill, Nebraska, and had deep roots in the U.S. Joseph was the son of Martin Harris Bodle and Mary Elizabeth Naysmith. Edna was the daughter of Ira Eden Irey and Sarah Ann Stottler.