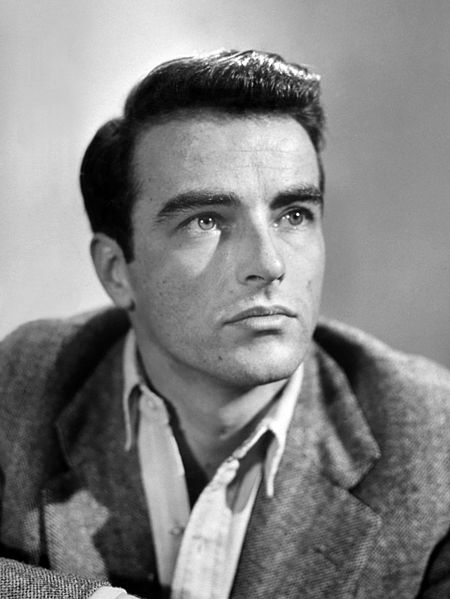 Montgomery Clift was an American actor. His many acclaimed roles included Red River, The Heiress, A Place in the Sun, I Confess, From Here to Eternity, The Young Lions, Judgment at Nuremberg, and The Misfits.

He was the son of Ethel Anderson Fogg and William Brooks Clift, who was Vice President of Omaha National Trust Company. His mother was adopted. She was evidently adopted by the Fogg family.

Montgomery’s patrilineal line can be traced to William Clift, who was born, c. 1676, in Kent, England.

Montgomery’s paternal grandfather was Moses Haney/Hainey Clift (the son of William Clift and Nancy Arwin Brooks). Moses was born in Tennessee. William was the son of James R. Clift and Alice Hitchcock. Nancy was the daughter of Moses Brooks and Agnes Gamble Fowler.

Montgomery’s paternal grandmother was Florence Virginia Parrot/Parrott (the daughter of Josiah Rhaton Parrott and Mureilla/Masila Mary Trammell). Florence was born in Georgia. Mureilla was the daughter of Jehu Jasper Trammell and Elizabeth Fain.

Montgomery’s biological maternal grandfather is generally believed by biographers to have been Woodbury Blair (the son of Montgomery Blair and Mary Elizabeth Woodbury). Montgomery Blair was an attorney and politician, who served as U.S. Postmaster General, from March 5, 1861 to September 24, 1864. He was the son of Francis Preston Blair, who was a journalist, newspaper editor, editor-in-chief of the Washington Globe, and influential figure in national politics, advising several U.S. presidents across party lines; and of Elizabeth Violet “Eliza” Gist. Montgomery Blair was a sibling of Civil War letter writer Elizabeth Blair Lee, wife of prominent U.S. Navy officer Samuel Phillips Lee, of the Lee family of Virginia; and of Francis Preston Blair, Jr., a Union Major General during the Civil War, who was a U.S. Senator from Missouri, from January 20, 1871 to March 4, 1873, and the Democratic Party’s nominee for Vice President of the United States, in 1868.

Montgomery’s biological maternal grandmother is generally believed by biographers to have been Maria Latham Anderson (the daughter of Robert Anderson and Elizabeth Bayard Clinch). Robert Anderson was a Union Commander at Ft. Sumter during the start of the Civil War, and later Major General. He was the son of Richard Clough Anderson and Sarah Marshall. Elizabeth was the daughter of Duncan Lamont Clinch and Eliza Bayard McIntosh.

Genealogies of Montgomery Clift (focusing on his mother’s side) – http://www.geni.com
http://famouskin.com