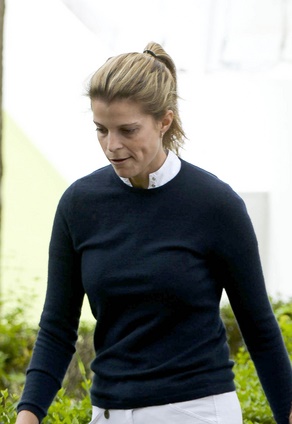 Onassis in 2015, photo by Prphotos

Athina Onassis is a French and Greek heiress and equestrian. She is the daughter of Christina Onassis, a businessperson, socialite, and heiress, and Thierry Roussel, a pharmaceutical heir. Her father is French, born in Neuilly-sur-Seine, Hauts-de-Seine, with many roots in Alsace-Lorraine. Her mother was born in New York City, New York, U.S., of Greek descent. Her grandfather was prominent shipping magnate Aristotle Onassis. He was married to U.S. First Lady Jacqueline Kennedy Onassis, until his death.

Athina’s paternal grandfather was Henri/Henry Julien Gaston Roussel (the son of Gaston Ernest Roussel and Germaine Damblat). Henri was born in Paris, and was a businessperson. He was the President and General Manager of the Roussel Uclaf Laboratoires Pharmaceutiques. Athina’s great-grandfather Gaston founded the company, and was was the son of Julien Antoine Jean Baptiste Roussel and Noémie “Fany”/Fanny Schreiber, who was from an Alsatian family, and may have been Jewish. Her parents were Jacob Schreiber and Rebecca Goschler.

Athina’s maternal grandfather was Aristotle Socrates Onassis (the son of Socrates/Socratis/Sokratis Onassis and Penelope Dologlu/Dolloglou/Dologlou). Aristotle was a prominent shipping magnate, who was born in Karataş, Smyrna, Ottoman Empire, now in Turkey, to a father from İzmir and a mother from Athens; he was also an Argentinian citizen. Athina’s great-grandfather Socratis was the son of Haralampos Onassis and Gethsimani Onassi. Penelope was born in Smyrni, Athens.

Athina’s maternal grandmother was Tina Onassis Niarchos (born Athina Mary Livanos, the daughter of Georgios Stavros Livanos and Arietta Zafirakis/Zafikakis). Athina’s grandmother Tina was born in London, England, U.K., to Greek parents. Stavros was born in Chios, Northern Aegean, Egeo, Greece. He was a prominent shipping magnate, who founded the Livanos shipping empire, and was the son of Georgios/George Livanos. Arietta was born in Chios.