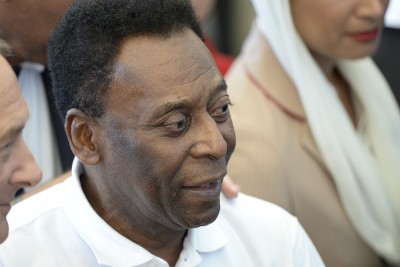 Pelé in 2014, photo by Celso Pupo/Bigstock.com

Pelé is a Brazilian footballer. He is widely regarded as the player of all time. He played as a forward.

Pelé is the son of footballer Dondinho (João Ramos do Nascimento) and Celeste Arantes. He was named Edson after American inventor Thomas Edison.

Pelé is married to Marcia Aoki. She is a Japanese-Brazilian importer of medical equipment. He has seven children, including three with his former wife Rosemeri dos Reis Cholbi, and two with his former wife, psychologist and gospel singer Assíria Lemos Seixas.

Source: Genealogy of Pelé (focusing on his mother’s side) – http://www.geni.com