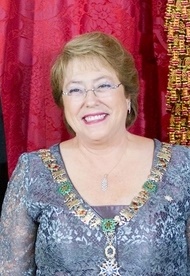 Bachelet in 2014, photo by prphotos

President Bachelet is the daughter of Alberto Bachelet Martínez, a Chilean Air Force Brigadier General, and Ángela Jeria Gómez, an archaeologist. She has two children with her former husband, architect Jorge Dávalos Cartes, and a daughter with her former partner, physician Aníbal Hernán Henríquez Marich.