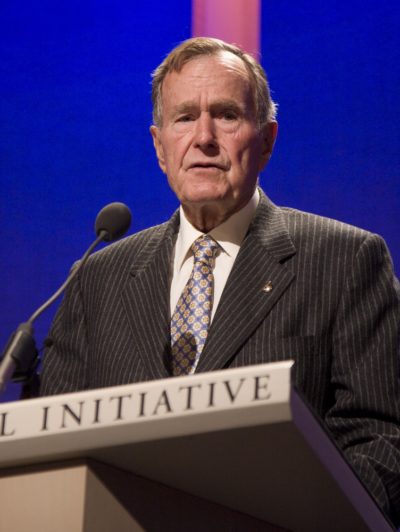 President Bush was Time Magazine’s Person of the Year for 1990. He also founded the Points of Light Foundation, to promote volunteerism.

President Bush was the son of Dorothy (Walker) and Prescott Bush (Prescott Sheldon Bush), a politician and banker, who served as a U.S. Senator from Connecticut, from November 4, 1952 to January 3, 1963. His family was wealthy and upper-class, with many New England ancestors dating back to the 1600s. President Bush was married to Barbara Bush (born Barbara Pierce), until her death. Among their six children are George W. Bush (George Walker Bush), who was the 43rd President of the United States, from January 20, 2001 to January 20, 2009, and politician Jeb Bush (John Ellis Bush), who was Governor of Florida, from 1999 to 2007; and among his grandchildren is politician George P. Bush (George Prescott Bush) and teacher, author, and journalist Jenna Bush Hager (born Jenna Welch Bush). President Bush’s granddaughter, model and businessperson Lauren Bush, is married to businessperson David Lauren, who is the son of designer Ralph Lauren. Among President Bush’s siblings was environmentalist and political campaigner Nancy Walker Bush Ellis. His uncle, George Herbert Walker, Jr., was a businessperson, who co-founded the New York Mets.

President Bush and his son were the second father-and-son U.S. president duo, after John Adams and John Quincy Adams. There was also a pair of U.S. Presidents who were grandfather-and-grandson, William Henry Harrison and Benjamin Harrison.

President Bush’s paternal grandfather was Samuel Prescott Bush (the son of The Rev. James Smith Bush and Harriet Eleanor Fay). Samuel was born in Brick Church, New Jersey. The Rev. James was an Episcopalian minister, religious writer, and attorney, and was the son of Obadiah Newcomb Bush and Harriet B. Smith. President Bush’s great-grandmother Harriet was the daughter of Samuel Howard Fay and Susan Montfort/Montford Shellman.

President Bush’s maternal grandfather was George Herbert “Bert” Walker (the son of David Davis “D. D.” Walker and Martha Adela Beaky). President Bush’s grandfather George was born in St. Louis, Missouri, and was a banker and businessperson. The Walker Cup of golf is named after him. David, a prominent businessperson, co-founded the clothing brand Ely & Walker, and was the son of George E. Walker, whose father was born in Clifton, Gloucestershire, England and whose mother was born in Scotland; and of Harriet Mercer. Martha was the daughter of Joseph Ambrose Beaky and Mary Anne/Ann Bangs. Sources: Genealogy of President Bush (contained within the genealogy of his son, George W. Bush) – http://www.wargs.com