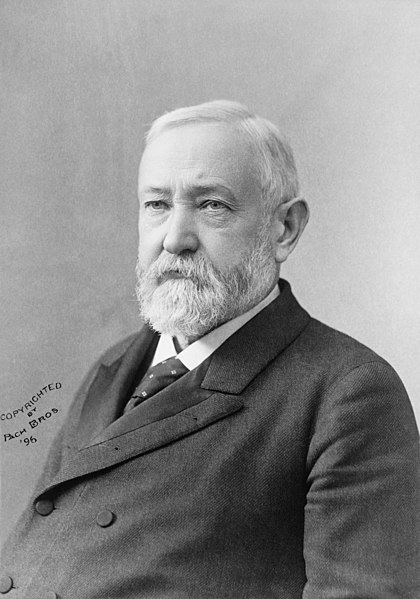 Benjamin Harrison, studio photograph by the Pach Brothers, in 1896

He was the Republican Party’s nominee for re-election as President of the United States in 1892.

President Harrison was the son of Elizabeth Ramsey (Irwin) and John Scott Harrison, who was a Member of the U.S. House of Representatives from Ohio, from March 4, 1853 to March 3, 1857. His paternal grandfather was William Henry Harrison, who was the ninth President of the United States, from March 4, 1841 until his death in office on April 4, 1841. The two Harrisons are the only U.S. Presidents to have been grandfather and grandson.

President Harrison’s father was of English descent. His mother had Scots-Irish/Northern Irish and Scottish ancestry.

President Harrison’s paternal grandfather was William Henry Harrison (the son of Benjamin Harrison V and Elizabeth Bassett). President William Henry Harrison was born in Berkeley Plantation, Charles City Co., Virginia, and was of entirely English ancestry. His own father, also named Benjamin, was a prominent revolutionary leader and Founding Father of the United States, who was the fifth Governor of Virginia, from 1781 to 1784; he was the son of Benjamin Harrison IV and Anne Carter, whose own mother was from Credenhill, Herefordshire, England. President Harrison’s great-grandmother Elizabeth Bassett was the daughter of William Bassett IV and Elizabeth Churchill, whose father was English, from North Aston, Oxfordshire. President William Henry Harrison’s parents were second cousins, through their shared Burwell ancestors.