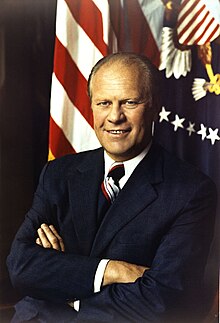 official photo of Gerald Ford c. 1974, DoD/Department of the Army/Office of the Deputy Chief of Staff for Operations

He was the Republican Party’s nominee for President of the United States in 1976.

President Ford was the son of Dorothy Ayer (Gardner) and Leslie Lynch King. He was adopted by his stepfather, Gerald Rudolph/Rudolff Ford, a businessperson and politician, whom his mother married in 1916. His brother was banker and politician Thomas Gardner Ford. President Ford’s ancestry included English, Scottish, and more distant Dutch, German, Irish, French, and Scots-Irish/Northern Irish. Also, one of President Ford’s maternal great-great-great-great-great-grandfathers, Antoni/Anthoni/Anthony Sadowski (c. 1669-1736), was Polish. Antoni was a trader and interpreter with Native Americans, employed as an Indian agent in the western country.

He was married to Betty Ford (born Elizabeth Ann Bloomer), with whom he had four children, including actor Steven Ford and author and photojournalist Susan Ford.

President Ford’s paternal grandfather was Charles Henry King (the son of Lynch R. King and Rebecca Jane Shepherd). Charles was born in Perry Township, Fayette, Pennsylvania. He was a prominent banker and businessperson who was crucial to the founding of several U.S. cities. Lynch was the son of Josiah King and Nancy Lynch. Rebecca was the daughter of Thomas Shepherd.

President Ford’s maternal grandfather was Levi Addison Gardner (the son of Alexander Gardner, Jr. and Sarah/Sally Miller). Levi was born in Solon Mills, McHenry, Illinois, and was mayor of Harvard, Illinois. Alexander was born in Burnbrae, Kilmalcolm, Renfrewshire, Scotland, the son of Alexander Gardner and Marie/Mary Brodie. Sarah was the daughter of Jesse Miller, Jr. and Rachel Seymour.

President Ford’s matrilineal line can be traced to Sarah Jones, who was born, c. 1643, in Guilford, New Haven, Connecticut, and to her parents, Thomas Jones and Mary, who were English.