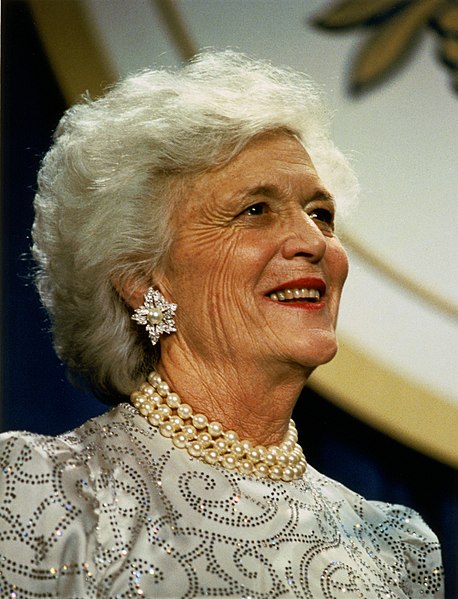 Barbara was the daughter of Pauline (Robinson) and Marvin Pierce, who was the president of McCall Corporation, a publisher of women’s magazines McCall’s and Redbook.

Barbara’s ancestry was English, some German, and small amounts (to varying degrees) of Welsh, Irish, Scottish, and French, and 1/128th Moravian.

Barbara’s paternal grandfather was Scott Pierce (the son of Jonas James Pierce and Kate Pritzel). Scott was born in Sharpsville, Mercer, Pennsylvania. Jonas was born in Swanzey, Cheshire, New Hampshire, the son of James Pierce, Jr. and Chloe Holbrook. Kate was born in Zweizel, Bavaria, Germany, the daughter of Anton Pritzel/Pritzl and Marie Louise Pasquay, who was born in Toulon, France.

Barbara’s paternal grandmother was Mabel Marvin (the daughter of Jerome Place Marvin and Martha Ann Stokes). Mabel was born in Cincinnati, Hamilton, Ohio. Jerome was the son of Samuel Ross Marvin and Julia Ann Place, whose parents were from Providence, Rhode Island, her father from Gloucester and her mother from Cranston.

Barbara’s maternal grandfather was James Edgar Robinson (the son of John Welch Robinson, Jr. and Sarah Coe). Barbara’s grandfather James was born in Marysville, Union, Ohio, and was an Associate Justice of the Ohio Supreme Court, from 1919 to 1932. John was the son of John Welch Robinson and Elizabeth “Betsy” Mitchell. Barbara’s great-grandfather John’s brother, James Wallace Robinson, served as a U.S. congressman from Ohio, from 1873 to 1875, as a Republican. Barbara’s great-grandmother Sarah was the daughter of Daniel Coe and Mary Gladden.

Sources: Genealogy of Barbara Bush (contained within the genealogy of her son, George W. Bush) – http://www.wargs.com

Some notes on the Moravian roots of Barbara Bush – http//www.svu2000.org