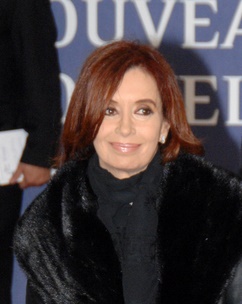 Cristina is the daughter of Eduardo Fernández and Ofelia Esther Wilhelm. She was married to politician Néstor Kirchner, until his death. Néstor preceded her as President of Argentina. The couple has two children, including politician Máximo Kirchner.

Genealogy of Cristina Fernández de Kirchner (focusing on her mother’s side) – http://www.genealogiafamiliar.net