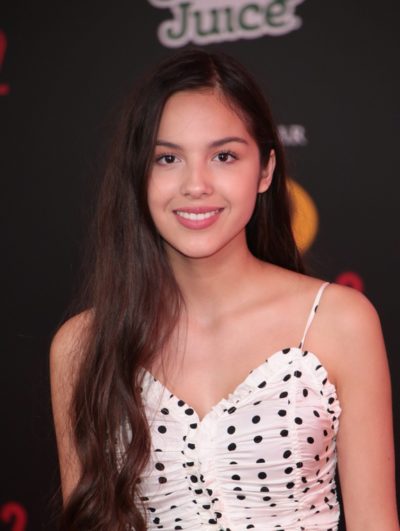 Rodrigo in 2018, photo by prphotos.com

Olivia Rodrigo is an American actress, singer, and songwriter. She stars on High School Musical: The Musical: The Series. She is the daughter of Jennifer and Chris Rodrigo.

An article in the Huffington Post stated, “Olivia’s father is Filipino, her mother is Western European descent, mostly Irish and German.” Her father is of three quarters Filipino ancestry. Her other roots are English, Irish, German, and a small amount of Austrian.

My great-grandfather immigrated here from the Philippines when he was just a teenager. He’s my grandma’s dad, and my grandpa is also Filipino as well. My dad grew up in a house where they were always making Filipino food, his grandpa always spoke Tagalog.

Olivia’s maternal grandfather is Patrick Harold Fox (the son of Harold Francis Fox and Mary Jane Egan). Olivia’s great-grandfather Harold was the son of Frank Charles Fox, whose grandparents were all German, and of Rose Jane Byrne, whose grandparents were all Irish. Olivia’s great-grandmother Mary Jane was the daughter of Edward James Egan, who was of Irish descent, and of Dorothy Loretta Loewen, who was of German descent.

Olivia’s maternal grandmother is Lynn Marie Krug (the daughter of Daniel James Krug and Anna May Freismuth). Daniel was of German descent, and was the son of Walter Henry Krug and Eleanora Elizabeth Guelig. Anna was the daughter of a Hungarian emigrant, Márton (later Martin) Freismuth, of Oka, Sopron (now part of Győr-Moson-Sopron); and of Anna Margaretha Guldan, whose parents were Austrian and German, respectively.

Olivia’s matrilineal ancestry can be traced back to her eighth great-grandmother, Margaretha Rehlinger.