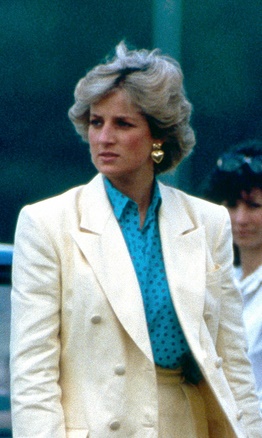 Princess Diana in 1987, photo by Prphotos.com

Diana, Princess of Wales was a British royal and activist. She was married to King Charles III, before he ascended to the throne, and was the mother of William, Prince of Wales, the heir apparent to the British throne, and Prince Harry, Duke of Sussex, and the grandmother of Prince George of Wales and Archie Mountbatten-Windsor, among others.

Princess Diana was the daughter of The Honourable Frances Ruth Burke (Roche) and Edward John Spencer, 8th Earl Spencer. She was of mostly English, as well as Scottish, ancestry. She had smaller amounts of Irish, Anglo-Irish, French, and German, roots, as well as likely 1/64th Indian (through her matrilineal line), ancestry, and even more distant Dutch, European Royal, Welsh, Danish, Channel Islander [Jersey], and Belgian forebears.

Her grandmothers were ladies-in-waiting to Queen Elizabeth The Queen Mother.

Princess Diana is widely believed by DNA researchers to have a matrilineal ancestor, Eliza Kewark, who was Indian, or of Armenian (paternal) and Indian (maternal) descent; if this is the case, it would make Princess Diana of 1/64th or 1/128th Indian ancestry.

Genealogy of Diana, Princess of Wales (through her son, Prince William) – http://www.wargs.com