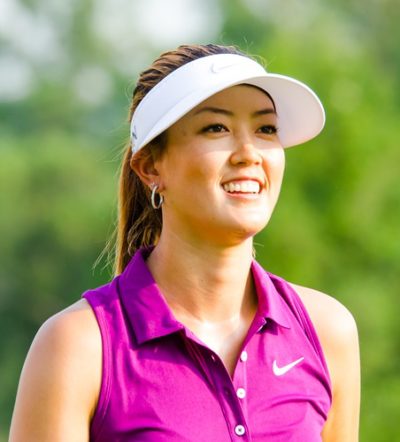 Wie West in 2014, photo by chatchai/Bigstock.com

Michelle was born in Honolulu, to South Korean parents. She speaks Korean and Japanese, which has made her very marketable in Japan and the Koreas. Her father, Byung-wook Wie, was a professor of travel industry management at the University of Hawaii. Her mother, Bo, was South Korea’s women’s amateur golf champion, and competed in a Miss Korea beauty pageant.

Michelle was a dual citizen of the U.S. and South Korea at birth, and renounced her South Korean citizenship in 2013.

Michelle’s paternal grandfather was Dr. Sang-Kyu Wie. Dr. Sang was a resident of Jangheung, Jeollanam-do, who was an emeritus professor at Seoul National University.

Michelle is married to Jonnie West, with whom she has a daughter. Jonnie works for the Golden State Warriors. He is the son of basketball executive and player Jerry West.