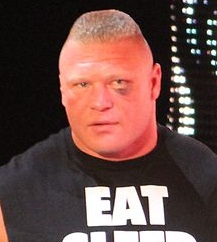 Brock is the son of Stephanie and Richard Lesnar. His father is of half Polish and half German descent. His mother is of at least part Norwegian ancestry. Brock attended the University of Minnesota, where he competed as an amateur wrestler. Along with his WWE stardom, he is a decorated NCAA wrestler, and became the undisputed UFC heavyweight champion during UFC 100 on July 11, 2009.

Brock’s ethnicity has many intrigued, as his enormous physique leaves one wondering what people could produce such a freak of nature. The UFC did not even have gloves that would fit his enormous hands.

Brock’s paternal grandfather was Edward Casper Lesnar (the son of August Lesnar/Lesner and Martha Ann Biczchowski/Krzebiatkowski). Edward was born in South Dakota. August was born in Poland, and was the son of Józef/Joseph Lasnart/Lesnar (whose parents were Anton Lasnart/Lesnar/Lesner and Marianna Heva Naczk) and Rosalia Eva Miotke (the daughter of Franciszek/Franz “Frank” Miotke and Paulina/Pauline Uzdrowska/Uzdrowski). Brock’s great-grandmother Martha was born in South Dakota, the daughter of Polish parents, Julius Krzebiatkowski, from Zbychowo, and Anna Burzyńska/Burzynski, from Kielno.

Brock’s maternal grandfather’s surname was Bakke. The surname is Norwegian.

Sources: Genealogy of Brock Lesnar (focusing on his father’s side) – https://www.geni.com