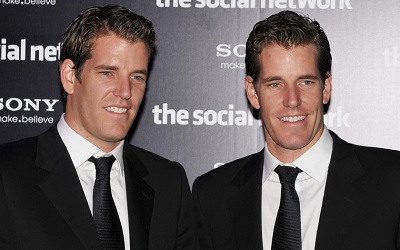 Tyler Winklevoss and Cameron Winklevoss in 2010, photo by Prphotos.com

Cameron Winklevoss and Tyler Winklevoss, the Winklevoss Twins, are American athletes (rowers) and entrepreneurs/computer businesspeople. They competed in the men’s pair rowing event at the 2008 Beijing Olympics.

Cameron and Tyler were played by one actor in a dual role, Armie Hammer, in the film The Social Network (2010).

Cameron and Tyler are the sons of Carol Jean (Leonard) and Howard Edward Winklevoss, Jr., an actuary, academic, and businessperson.

Cameron and Tyler’s paternal grandmother was Marian Virginia Minnis (the daughter of Earl Blaine Minnis and Hazel Delle Pattison). Marian was born in Pennsylvania. Earl was the son of Asher Thornton Minnis and Jennie/Jane Catherine Roberts. Hazel was the daughter of John Pattison and Maria Louisa/Louise Cleeland.

Cameron and Tyler’s maternal grandmother was Mildred Lotz (the daughter of Gustave A. Lotz and Gesine Margaret Aldag). Mildred was born in New York. Gustave was the son of Tellman Lotz and Martha Herold. Gesine was the daughter of Wilhelm/William Aldag and Adelheid/Adelaide Meyer.